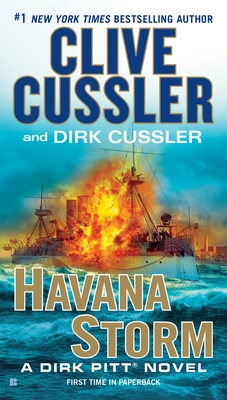 This is book number 23 in the Dirk Pitt Adventure series.

Renowned marine adventurer Dirk Pitt returns to stem a toxic outbreak in the thrilling novel from the grand master of adventure and #1 New York Times–bestselling author.

While investigating an unexplained poisonous spill in the Caribbean Sea that may ultimately threaten the United States, Dirk Pitt unwittingly becomes involved in something even more dangerous—a post-Castro power struggle for the control of Cuba. Meanwhile, Pitt’s children, marine engineer Dirk and oceanographer Summer, are on an investigation of their own, chasing an Aztec stone that may reveal the whereabouts of a vast historical Aztec treasure. The problem is, that stone was believed to have been destroyed on the battleship Maine in Havana Harbor in 1898, which brings them both to Cuba as well—and squarely into harm’s way. The whole Pitt familyhas been in desperate situations before . . . but perhaps never quite as dire as the one facing them now.


Dirk Cussler is the coauthor with Clive Cussler of six Dirk Pitt adventures, most recently Odessa Sea. He lives in Arizona.

“A new Clive Cussler novel is like a visit from your best friend.”—Tom Clancy, #1 New York Times bestselling author of Command Authority

“When the going gets tough, I read Clive Cussler, for no one can spin a yarn that’s so thoroughly spellbinding and entertaining as he can.”—Harold Coyle, New York Times bestselling author of No Warriors, No Glory

“Ardent followers of the Pitt clan and their nautical escapades will appreciate the family dynamics and camaraderie.”—Publishers Weekly

“Cussler can keep anyone on the edge of their chair with his…action.”—UPI