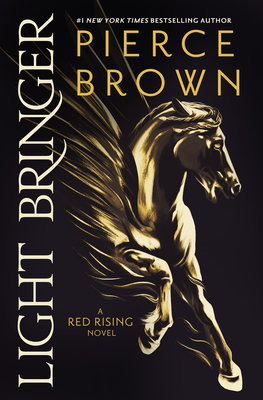 “Brown’s plots are like a depth charge of nitromethane dropped in a bucket of gasoline. His pacing is 100% him standing over it all with a lit match and a smile, waiting for us to dare him to drop it.”—NPR, on Dark Age

“The measure of a man is not the fear he sows in his enemies. It is the hope he gives his friends.”—Virginia au Augustus

The Reaper is a legend, more myth than man: the savior of worlds, the leader of the Rising, the breaker of chains.

But the Reaper is also Darrow, born of the red soil of Mars: a husband, a father, a friend.

The worlds once needed the Reaper. But now they need Darrow. Because after the dark age will come a new age: of light, of victory, of hope.

Pierce Brown is the #1 New York Times bestselling author of Red Rising, Golden Son, Morning Star, Iron Gold, and Dark Age. His work has been published in thirty-four languages and thirty-six territories. He lives in Los Angeles, where he is at work on his next novel.

PRAISE FOR PIERCE BROWN AND HIS RED RISING SAGA

“In a word, Golden Son is stunning. Among science fiction fans, it should be a shoo-in for book of the year.”—Tordotcom

“A page-turning epic filled with twists and turns.”—Booklist (starred review)

“Complex, layered . . . mature science fiction existing within the frame of blazing space opera . . . done in a style [that] borders on Shakespearean.”—NPR

“An epic story of rebellion, social unrest and sacrifice.”—Orlando Sentinel