Only Passing Through: The Story of Sojourner Truth (Paperback) 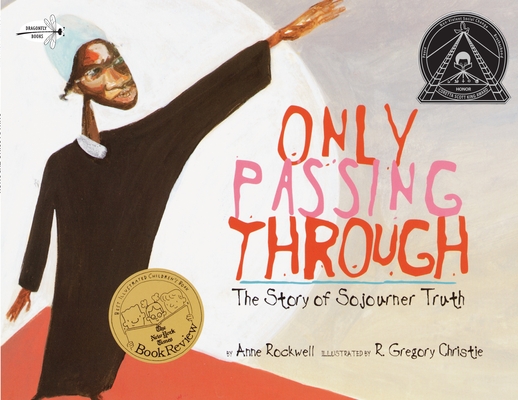 A powerful picture book biography of one of the abolitionist movement's most compelling voices.

Sojourner Truth traveled the country in the latter half of the 19th century, speaking out against slavery. She told of a slave girl who was sold three times by age 13, who was beaten for not understanding her master's orders, who watched her parents die of cold and hunger when they could no longer work for their keep. Sojourner's simple yet powerful words helped people to understand the hideous truth about slavery. The story she told was her own.

Only Passing Through is the inspiring story of how a woman, born a slave with no status or dignity, transformed herself into one of the most powerful voices of the abolitionist movement. Anne Rockwell combines her lifelong love of history with her well-known skill as a storyteller to create this simple, affecting portrait of an American icon.

Anne Rockwell has been an innovator in children's books for more than 30 years and has written well over 100 books.

Gregory Christie's first book, The Palm of My Heart: Poetry by African American Children, received a Coretta Scott King Honor for illustration in 1997.

Reviewed in Bookselling Kids' Pick of the Lists Part Two for October 2000.

"The facts in this picture-book biography speak as eloquently as its illustrations, which have an authority and passion recalling Jacob Lawrence's Harriet and the Promised Land."—The Horn Book, Starred Review

"The look and feel of a children’s classic . . . a valuable addition to any child’s library.”
-- The New York Times

"It's a powerful story, well told and handsomely set; worth of its courageous subject." -- The Horn Book Magazine, Starred