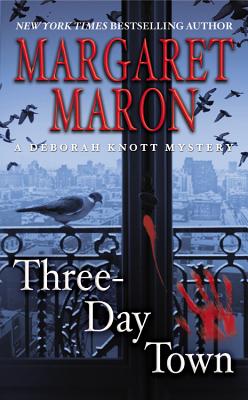 This is book number 17 in the A Deborah Knott Mystery series.

“In her latest Deborah Knott mystery, Maron injects an added spark by spiriting Deborah and her husband, Dwight, to a new locale -- a delayed honeymoon in New York City. Circumstances, including a murder at their borrowed apartment, bring them in contact with Maron's detective from another series, Sigrid Harald, and introduce a new cast of fascinating personalities. I'm always glad to see a new mystery from Maron and look forward to more of both Knott and Harald!”
— Rosemary Pugliese, Quail Ridge Books, Raleigh, NC

Three-Day Town is the winner of the Agatha award for best novel where Deborah and Dwight must team up with Lt. Harald to catch the killer before he strikes again.

After a year of marriage, Judge Deborah Knott and Sheriff's Deputy Dwight Bryant are off to New York City for a long-delayed honeymoon. January might not be the perfect time to take a bite of the Big Apple, but Dwight's sister-in-law has arranged for them to stay in her Upper West Side apartment for a week.

Deborah had been asked to deliver a package to Lieutenant Sigrid Harald of the NYPD from Sigrid's Colleton County grandmother. But when the homicide detective comes to pick it up, the package is missing and the building's super is found murdered.

" This book has plenty of suspense and the characters are well done. One of Ms. Maron's strengths is the believability of her characters. They add to the story and don't distract the reader with useless red herrings. As usual, the interplay between Dwight and Deborah is wonderfully romantic even in the midst of a murder. I have to say that I will be glad to see them back home in the next book. I just love the family dynamics and the southern ambiance in these books. Can't wait for the next book in the series!!"—imainlinefiction.blogspot.com on THREE-DAY TOWN

"Dwight's obsession with New York gourmet delights and Deborah's passion for stylish, impractical footwear are charming, but Sigrid's slow but steady police work carries the day. Fans who have hankered for Deborah and Sigrid to find themselves in the same story will be charmed."—Kirkus on THREE-DAY TOWN

"This is a strong addition to a series that's won Edgar, Agatha, Anthony, and Macavity awards."—Publishers Weekly on THREE-DAY TOWN

"[Maron] plots like a modern-day Christie, but the North Carolina charm is all her own."—Kirkus on CHRISTMAS MOURNING

"Warm and authentic family relationships are the heart of this evergreen series."—Publishers Weekly on CHRISTMAS MOURNING

"[A] winning entry and a fine holiday mystery."—Booklist on CHRISTMAS MOURNING

"Every Margaret Maron is a celebration of something remarkable."—New York Times Book Review