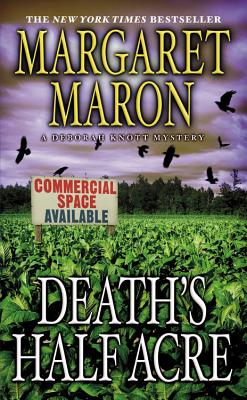 This is book number 14 in the A Deborah Knott Mystery series.

Margaret Maron—winner of the most prestigious awards in mystery fiction—returns with another novel featuring her critically acclaimed sleuth Deborah Knott.

Unchecked urbanization has begun to eclipse the North Carolina countryside. As farms give way to shoddy mansions, farmers struggle to slow the rampant growth. In the shadows, corrupt county commissioners use their political leverage to make profitable deals with new developers. A murder will pull Judge Deborah Knott and Sheriff's Deputy Dwight Bryant into the middle of this bitter dispute and force them to confront some dark realities.

On DEATH'S HALF ACRE
"Those looking for a mellow, down-home mystery will be well rewarded."—Publishers Weekly (starred)

"[Margaret Maron] skillfully portrays the growing tension between family farmers and suburbanites....As always Maron weaves in a couple of subplots that keep things interesting and allow her to touch on a range of social issues."—Associated Press

"Outstanding....Maron tackles big issues...with insight and pathos....Maron has never written a bad book, and with the 13th in the series, she gives a clear picture of contemporary life in the rural South, tying it up in a neat mystery that keeps the reader guessing to the end. Highly recommended."—Library Journal (starred review)

"HARD ROW is laced with strong and timely political statements about undocumented workers....Readers will be satisfied with the newest entry in this reliable series."—USA TODAY