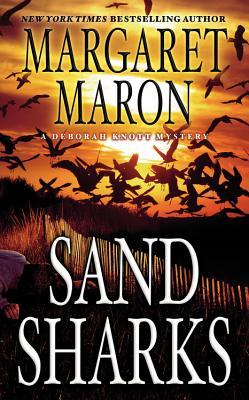 This is book number 15 in the A Deborah Knott Mystery series.

When Judge Deborah Knott travels to Wrightsville Beach for a summer conference for North Carolina District Court Judges, she stumbles upon the body of one of her colleagues.

Meanwhile, Deborah's husband, Sheriff's Deputy Dwight Bryant, is in Virginia with his son, tying up loose ends left by the death of his first wife.

When another judge is found murdered at the conference, it soon becomes evident that Deborah may be the killer's next target. Her relaxing trip to the seaside soon transforms into a harrowing experience, and she must summon all of her strength and investigative expertise to track down the culprit before she becomes the next victim.

On SAND SHARKS:
"Maron writes with such a strong sense of place that you can even smell the ocean air on Wrightsville Beach. The plot, populated with enticing characters, moves swiftly; an essential read for Maron fans and mystery lovers."—Library Journal