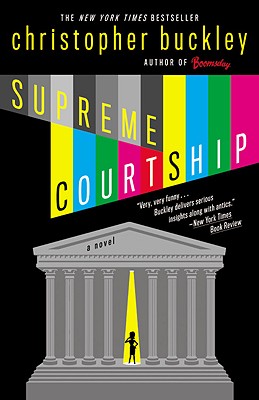 President of the United States Donald Vanderdamp is having a hell of a time getting his nominees appointed to the Supreme Court. After one nominee is rejected for insufficiently appreciating To Kill A Mockingbird, the president chooses someone so beloved by voters that the Senate won't have the guts to reject her -- Judge Pepper Cartwright, the star of the nation's most popular reality show, Courtroom Six.

Will Pepper, a straight-talking Texan, survive a confirmation battle in the Senate? Will becoming one of the most powerful women in the world ruin her love life? And even if she can make it to the Supreme Court, how will she get along with her eight highly skeptical colleagues, including a floundering Chief Justice who, after legalizing gay marriage, learns that his wife has left him for another woman.

Soon, Pepper finds herself in the middle of a constitutional crisis, a presidential reelection campaign that the president is determined to lose, and oral arguments of a romantic nature. Supreme Courtship is another classic Christopher Buckley comedy about the Washington institutions most deserving of ridicule.

"One of the funniest writers in the English language."—Tom Wolfe

"The quintessential political novelist of our time."—Fortune

"One of the rarest political specimens-- the authentically comic writer."—Boston Globe

Buckley's ingenious and mischievous tale of a Washington shakeup via an injection of good old American authenticity is funny and entertaining . . . clever, merry, escapist.—Booklist

"The premise of Christopher Buckley's new political comedy, Supreme Courtship, isn't all that far-fetched. In fact... this novel could more accurately be called near-fetched -- disarmingly, hilariously so... You'll be belly-laughing through Buckley's byzantine plot, which includes Peester v. Spendo-MaxCorp., a case in which a male shoplifter stuffing merchandise into a burqa sues the Reno police force for racial and religious profiling, and ends with the Supreme Court deciding a presidential election. As the president sighs, "It's not as though we haven't been there before." Last go-around, it wasn't quite so uproarious."—Lisa Zeidner, The Washington Post

"Hilarious . . . the book is full of wry observations on the follies of Washington high life. What makes it laugh-out-loud funny is Buckley's sense of how little you have to exaggerate to make Washington seem absurd."—New York Daily News

"Christopher Buckleyis America's greatest living political satirist. That's my story, and I'm sticking to it . . . Just take my word for it, and the word is: delicious."—Adam Woog, Seattle Times

"What sets Buckley apart is his ability to mock Washington yet convey a genuine admiration for many of its residents . . . Buckley remains hilarious."—USA Today

"[Supreme Courtship] is full of such tasty nuggets, along with arcane Latin phrases and mirth-inducing names like Blyster Forkmorgan . . . One of the book's telling points is that he never mentions which poltical parties these folks represent, and you realize it doesn't much matetr. When you are sketching a political cartton, donkeys and elephants alike are juicy targets."

"You can't make this stuff up . . . Unless of course you are Christopher Buckley, son of the late William, whose fictional satires are must-reads for those looking to understand our cultural moment, or at least have a few laughs at it. Buckley is a master at cooking up scenarios that are wild without being entirely absurd and populating them with attractive characters..."—Chicago Sun Times

"Once again, Buckley returns to his pet theme: the vanity and perfidy of the capital's ruling elite. And once again he delivers serious insights along with antics . . . Buckley has fun with the court's fractious politics and even more fun riffing on the strange creatures and customs of its marble halls . . . Buckley lampoons as an insider. A onetime speechwriter for George H.W. Bush, he knows the monograms on the linens and has supped with kings. But he's more an anthropologist than a settler of scores. His own libertarian-leaning politics shine through his narratives without weighing them down. And he's admirably fair-minded, skewering politically correct crusaders on one page and holy-rolling bigots on the next. His villains are Washington's ideologues, left and right, whose principles always boil down to self-regard. Buckley's heart belongs to the outsiders and mavericks who see through all the spin. Each of his novels may be light as air, but bit by bit they're building up into a significant social portrait, the beginnings of a vast Comédie-Washingtonienne . . . At a time of high political absurdity, Buckley remains our sharpest guide to the capital, and amore serious one than we may suppose."—Blake Wilson, New York Times Review of Books