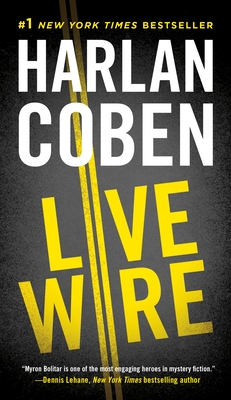 This is book number 10 in the Myron Bolitar series.

The bestselling author and creator of the hit Netflix drama The Stranger exposes a different side of sports agent Myron Bolitar in this explosive thriller....

When former tennis star Suzze T and her rock star husband, Lex, encounter an anonymous Facebook post questioning the paternity of their unborn child, Lex runs off. Suzze, who is eight months pregnant, asks their agent, Myron Bolitar, to save her marriage—and perhaps her husband’s life. But when Myron finds Lex, he also finds someone he wasn’t looking for: his sister-in-law, Kitty, who, along with Myron’s brother, abandoned the Bolitar family long ago.

As Myron races to locate his missing brother while their father clings to life, he must face the lies that led to the estrangement—including the ones told by Myron himself....

With more than seventy million books in print worldwide, Harlan Coben is the #1 New York Times bestselling author of thirty novels, including the Myron Bolitar series and a series aimed at young adults featuring Myron's newphew, Mickey Bolitar. His books are published in forty-three languages around the globe and have been number one bestsellers in more than a dozen countries. The winner of the Edgar, Shamus, and Anthony Awards, he lives in New Jersey.

“Harlan Coben is one of the best thriller writers in the business...fans will be awe-struck with this latest novel, wondering how Coben maintains such a high level of excellence.”—Associated Press

“Live Wire is a stunning achievement in all respects—everything a thriller, and a novel, is supposed to be.”—The Providence  Journal

“Delivers a deceptively complex plot and illustrates why Myron is such an intriguing character…Coben...deftly shows that he has more stories to tell about his long-running character.”—South Florida Sun-Sentinel

“One of Coben’s most exciting and multidimensional tales yet...a gripping tale.”—The Columbus Dispatch

“Coben reveals the introspective side of his slick character...Fans will enjoy the change of focus and wonder how Coben will re-create his hero in his next adventure.”—Library Journal