That Mad Ache: A Novel (Paperback) 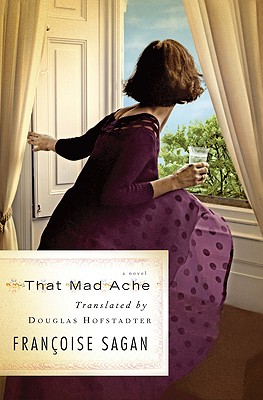 “One side of this book is That Mad Ache, a fresh translation of the French novel La Chamade, written by Francoise Sagan, whose Bonjour, Tristesse became an international sensation when the author was 19. Flip the book over and the other side is Translator, Trader, a brilliant, 100-page essay on the controversial art of translation by the translator himself, who is none other than Douglas Hofstadter, the Pulitzer Prize-winning genius who wrote Godel, Escher, Bach. That Mad Ache is a witty, ironic dissection of upper class French lovers, which gracefully bares the souls of Sagan's characters and watches them misunderstand each other. It's a labyrinthine journey into the human heart in a fresh, invigorating new translation.”
— Nick DiMartino, University Book Store, Seattle, WA

That Mad Ache, set in high-society Paris in the mid-1960's, recounts the emotional battle unleashed in the heart of Lucile, a sensitive but rootless young woman who finds herself caught between her carefree, tranquil love for 50-year-old Charles, a gentle, reflective, and well-off businessman, and her sudden wild passion for 30-year-old Antoine, a hot-blooded, impulsive, and struggling editor. As Lucile explores these two versions of love, she vacillates in confusion, but in the end she must choose, and her heart's instinct is surprising and poignant. Originally published under the title La Chamade, this new translation by Douglas Hofstadter returns a forgotten classic to English.

In Translator, Trader, Douglas Hofstadter reflects on his personal act of devotion in rewriting Francoise Sagan's novel La Chamade in English, and on the paradoxes that constantly plague any literary translator on all scales, ranging from the humblest of commas to entire chapters. Flatly rejecting the common wisdom that translators are inevitably traitors, Hofstadter proposes instead that translators are traders, and that translation, like musical performance, deserves high respect as a creative act. In his view, literary translation is the art of making subtle trades in which one sometimes loses and sometimes gains, often both losing and gaining at the same time. This view implies that there is no reason a translation cannot be as good as the original work, and that the result inevitably bears the stamp of the translator, much as a musical performance inevitably bears the stamp of its artists. Both a companion to the beloved Sagan novel and a singular meditation on translation, Translator, Trader is a witty and intimate exploration of words, ideas, communication, creation, and faithfulness.

As a teenager, Françoise Sagan (1935-2004) rocketed to world renown with her prize-winning and bestselling novel Bonjour Tristesse. She went on to write many other successful novels, including A Certain Smile and Aimez-vous Brahms, as well as numerous plays and memoirs.

Douglas Hofstadter is best known for his Pulitzer Prize-winning book Gödel, Escher, Bach. Among his more recent works are Le Ton beau de Marot, a verse translation of Alexander Pushkin's novel-in-verse Eugene Onegin, and I Am a Strange Loop. He lives in Bloomington, Indiana.