Know What I Mean?: Reflections on Hip-Hop (Paperback) 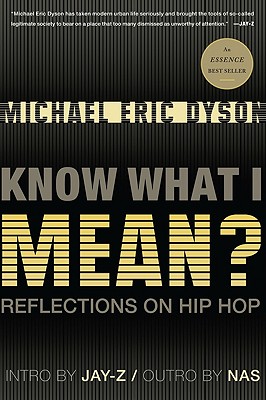 Whether along race, class or generational lines, hip-hop music has been a source of controversy since the beats got too big and the voices too loud for the block parties that spawned them. America has condemned and commended this music and the culture that inspires it. Dubbed "the Hip-Hop Intellectual" by critics and fans for his pioneering explorations of rap music in the academy and beyond, Michael Eric Dyson is uniquely situated to probe the most compelling and controversial dimensions of hip-hop culture. Know What I Mean? addresses salient issues within hip hop: the creative expression of degraded youth that has garnered them global exposure; the vexed gender relations that have made rap music a lightning rod for pundits; the commercial explosion that has made an art form a victim of its success; the political elements that have been submerged in the most popular form of hip hop; and the intellectual engagement with some of hip hop's most influential figures. In spite of changing trends, both in the music industry and among the intelligentsia, Dyson has always supported and interpreted this art that bloomed unwatered, and in many cases, unwanted from our inner cities. For those who wondered what all the fuss is about in hip hop, Dyson's bracing and brilliant book breaks it all down.

Michael Eric Dyson has been named by Ebony as one of the one hundred most influential black Americans and is the author of fourteen other books. He is University Professor at Georgetown University and lives in Washington, D.C.