Midnight's Descendants: A History of South Asia since Partition (Hardcover) 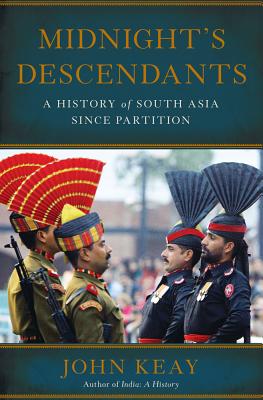 Dispersed across India, Pakistan, Nepal, Bangladesh, and Sri Lanka, Midnight's Descendants-the generations born since the 1947 "midnight hour partition" of British India-are the world's fastest growing population. This vast region and its peoples wield an enormous influence over global economics and geopolitics, yet their impact is too often simplified by accounts that focus solely on one nation and ignore the intricate web of affiliations that shape relations among British India's successor states. Now, in Midnight Descendants, celebrated historian John Keay presents the first comprehensive history of this complex and interconnected region, delving deep into the events that have shaped its past and continue to guide its future.

The 1947 partition was devastating to the larger of the newly created states, and it continues to haunt them to this day. Joined by their common origin and the fear of further partition, the five key nations of South Asia have progressed in tandem to a large degree. These countries have been forced to grapple with common challenges, from undeveloped economies and fractured societies to foreign interventions and the fraught legacy of imperialism, leaving them irrevocably intertwined. Combining authoritative historical analysis with vivid reportage, Keay masterfully charts South Asia's winding path toward modernization and democratization over the past sixty years. Along the way, he unravels the volatile India-Pakistan relationship; the rise of religious fundamentalism; the wars that raged in Kashmir and Sri Lanka; and the fortunes of millions of South Asia migrants dispersed throughout the world, creating a full and nuanced understanding of this dynamic region.

Expansive and dramatic, Midnight's Descendants is a sweeping narrative of South Asia's recent history, from the aftermath of the 1947 partition to the region's present-day efforts to transcend its turbulent past and assume its rightful role in global politics.

John Keay is the author of several acclaimed books, including China: A History, The Great Arc: The Dramatic Tale of How India Was Mapped and Everest Was Named, and the bestselling India: A History. He was formerly a special correspondent for the Economist, and contributes regularly to the Sunday Telegraph, Times Higher Educational Supplement, and the Literary Review.

"[Midnight's Descendants] provides a useful examination of the past and a hopeful projection of the future."—Dallas Morning News

"A concise, competent account of the events leading up to and following the pivotal moment of partition"—Washington Times

"[A] vivid, thoughtful and not terribly optimistic history.... An insightful, entirely engrossing account of a dysfunctional region that may or may not pull itself together."—Kirkus, starred review

"An ambitious, wide-ranging study of these states since partition....This is a well-done examination of a vibrant, dangerous, but promising region."—Booklist