The Unruly City: Paris, London and New York in the Age of Revolution (Hardcover) 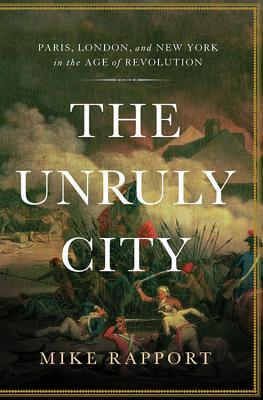 A lauded expert on European history paints a vivid picture of Paris, London, and New York during the Age of Revolutions, exploring how each city fostered or suppressed political uprisings within its boundaries

In The Unruly City, historian Mike Rapport offers a vivid history of three intertwined cities toward the end of the eighteenth century-Paris, London, and New York-all in the midst of political chaos and revolution. From the British occupation of New York during the Revolutionary War, to agitation for democracy in London and popular uprisings, and ultimately regicide in Paris, Rapport explores the relationship between city and revolution, asking why some cities engender upheaval and some suppress it.

Why did Paris experience a devastating revolution while London avoided one? And how did American independence ignite activism in cities across the Atlantic? Rapport takes readers from the politically charged taverns and coffeehouses on Fleet Street, through a sea battle between the British and French in the New York Harbor, to the scaffold during the Terror in Paris.

The Unruly City shows how the cities themselves became protagonists in the great drama of revolution.

Dr. Michael Rapport is a professor of history at the University of Glasgow in Scotland and a fellow of the Royal Historical Society. The author of numerous books, Rapport lives in Stirling, Scotland.

"Highly readable.... [Rapport] has an excellent eye for the arresting anecdote or apt quotation.... He also excels at literary portraiture, painting quick but vivid sketches of well-known figures from Mary Wollstonecraft to Maximilien Robespierre."—Wall Street Journal

[Rapport] creates a richly textured picture of 18th-century urban life, and how it varied among the three cities... in [his] hands, the cities become players in the story, not simply backdrops for the turmoil of the Age of Revolutions."—Shelf Awareness

"[An] eye-opening comparative history.... Rapport's in-depth research into these three cities at war is significant, the similarities and differences making the story all the more fascinating."—Kirkus Reviews