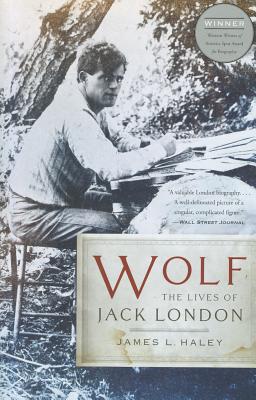 Born a working-class, fatherless Californian in 1876, Jack London spent his youth as a boundlessly energetic adventurer on the bustling West Coast; by adulthood he had matured into the iconic American author of such still universally loved books as The Call of the Wild and White Fang. In Wolf, award-winning biographer James L. Haley explores the forgotten Jack London: a hard-living globetrotter bristling with ideas whose passion for social justice roared until the day he died. Returning London to his proper place in the American pantheon, Haley resurrects a major American novelist in his full fire and glory.

James L. Haley is the author of The Buffalo War, Passionate Nation, and Sam Houston: A Life, which won nine historical and literary awards. He lives in Austin, Texas.

San Francisco Chronicle
“[A] gripping narrative…Haley understands what longtime scholars of London have often failed to see: that London had multiple lives, and explored his own identities in his fiction.”

Seattle Times
“[V]ividly drawn…Haley has done a fine job. His book is a compelling story about a man who, after the death of Mark Twain in 1910, was America’s most prominent author.”
Crosscut.com
“In Wolf, James L. Haley gives us a terrific, compact biography that helps to restore London as a complex, prodigious writer of much (perhaps too much) more than tales of adventure.”

Irish Examiner (Cork)
"Wolf is a glorious achievement which will encourage readers to seek out more about and by Jack London.”

Dallas Morning News
“[Wolf] reads smoothly, and for any who lack a knowledge about this iconoclastic and sensational writer of the early 20th
century, it will make a pleasant bedside companion.”

USA Today
“James Haley’s fascinating biography is as much about London’s socialist politics and domestic turmoil as his best sellers.”

Booklist (Starred Review)
“Careful research illuminates the creative process through which London forged such powerful works as Call of the Wild, White Fang, and The Game…[A]ny reader who shares even a spark of London’s incandescent curiosity will relish this vivid portrait.”

Library Journal“Haley’s work is the sympathetically told story of a man unlucky in his birth to foolish parents, unlucky enough in his health to die at 40, and unlucky with women until his second wife, Charmian. Recommended.”

Wall Street Journal“[A] valuable London biography. It surpasses Irving Stone’s 1938 Sailor on Horseback, giving us a well-delineated picture of a singular, complicated figure…These days we have little sense of the literary glory that was Jack London. Thanks to James Haley’s zeal, the author of [the fiercely imaginative Before Adam], not just the man of The Call of the Wild, is before us again.”

Daily Telegraph(UK)
“[Haley’s] argument is persuasive that the unexpurgated London has never been more relevant…His biography is polished, sleek, readable and pulls no punches.”