Behind the Throne: A Domestic History of the British Royal Household (Hardcover) 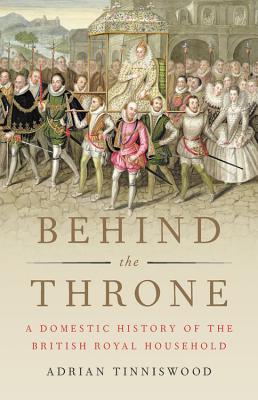 By Adrian Tinniswood
$35.84
Not Available

An "enchanting" upstairs/downstairs history of the British royal court, from the Middle Ages to the reign of Queen Elizabeth II (Wall Street Journal). Monarchs: they're just like us. They entertain their friends and eat and worry about money. Henry VIII tripped over his dogs. George II threw his son out of the house. James I had to cut back on the alcohol bills. In Behind the Throne, historian Adrian Tinniswood uncovers the reality of five centuries of life at the English court, taking the reader on a remarkable journey from one Queen Elizabeth to another and exploring life as it was lived by clerks and courtiers and clowns and crowned heads: the power struggles and petty rivalries, the tension between duty and desire, the practicalities of cooking dinner for thousands and of ensuring the king always won when he played a game of tennis. A masterful and witty social history of five centuries of royal life, Behind the Throne offers a grand tour of England's grandest households.

Adrian Tinniswood is senior research fellow in history at the University of Buckingham and the author of Behind the Throne as well as the New York Times bestseller The Long Weekend and The Verneys, which was shortlisted for the Samuel Johnson Prize. Tinniswood has contributed to the London Times, the New York Times, History Today, BBC History Magazine, and the Literary Review, as well as television and radio programs in the US and UK. He was awarded an OBE for services to heritage by her majesty, the Queen, and lives in Bath, England.

"A glimpse into a world where everything is possible for the rulers, because the ruled do all the work: This sounds enchanting, and so Behind the Throne proves to be...The author has a wry humor and a way with a phrase."—Wall Street Journal

"Charmingly erudite...Like a seasoned tour guide, Tinniswood keeps us moving through chambers of wonders, from the Elizabethan to the modern era...Tinniswood is both a careful scholar and a nimble writer."—Washington Post

"Tinniswood (The Long Weekend) explores the inner workings of the well-oiled machine that is the household, servants, and monarchy of Britain...A masterpiece of history that reads like a novel; a true delight."—Library Journal (starred review)

"[Tinniswood] amply, entertainingly, compellingly succeeds in making the case that when it comes to British royalty, it takes a village to make a monarch."—New York Journal of Books

"[Tinniswood] displays a knack for uncovering the absurd and delightful. A wit borne of a deep intimacy with his subject shows through. It all has the effect of bringing the monarchy down to earth."—New York Times Book Review

"[A] juicy new domestic history of the royal household...Tinniswood's magpie narrative is...about boundaries: the walls, literal and metaphorical, that separate monarchs from their people."—Guardian

"Fascinating...Never overly deferential, but humorous and distantly respectful. Our royals are human beings after all...Behind the Throne is a wonderfully entertaining account of life through five centuries of royal households."—Sunday Times

"Behind the Throne, erudite and amusing, bulges with colourful scenes of barely managed chaos at court."—Times

"[A] juicy new domestic history of the royal household...Delicious."—Observer

"This is the most interesting and informative book on the British royalty for many years."—Literary Review

"An intimate and entertaining look at the private lives of monarchs from Elizabeth I to the current occupants of Buckingham Palace...Deft, zesty social history." -Kirkus—Kirkus

"Think of Behind the Throne as Downton Abbey meets The Tudors, with a dash of Victoria and a smidgen of The Crown thrown in."—Winnipeg Free Press

"Well-researched and often entertaining...Devoted watchers of The Crown will especially enjoy the nimble analysis of both the narcissistic Edward VIII's brief reign and Princess Margaret's doomed romance...Utilizing a Downton Abbey approach, this enlightening narrative allows the royal family mystique to disappear just a little."—Publishers Weekly

"An enjoyable and lively account of the British royal household from Elizabeth I to Elizabeth II."—Choice

"If Downton Abbey showcases a well-oiled machine of domestic efficiency in an English estate, you might think the servants surrounding British monarchs would be held to an even higher standard of discretion and excellence. And, as historian Tinniswood warns, you'd be entirely wrong. The reality, as he explores in this diverting book covering the domestic life at court from Elizabeth to Elizabeth, is both much messier and incredibly interesting...This rare glimpse into royal households reveals the priorities and peculiarities of kings and queens."—Booklist

"A lively, engaging, and endlessly fascinating account of life behind closed doors at the English court. Exploring five centuries of royal service--from Elizabeth I to her modern day namesake--this is a must-read for all fans of British royal history."—Tracy Borman, author of The Private Lives of the Tudors

"Both fun and scholarly, this is a back-stage, back-stairs, sometimes backside history of England that focuses on the seamy-side of power, the sights you weren't intended to see and the stories you weren't supposed to hear. Savor it like a good gossip column."—David Starkey, author of Elizabeth: The Struggle for the Throne and Six Wives: The Queens of Henry VIII

"Tinniswood's riveting overview of 500 years of the men and women who made the monarchy shows what has changed - and what hasn't. From the courtiers who handled foreign diplomats for James I to the chauffeurs who drove Edward VII, the first royal motorist, the delight is in the detail."—Sarah Gristwood, author of Game of Queens and Elizabeth: The Queen and the Crown

"Behind the Throne is so much fun it's almost a guilty pleasure. Adrian Tinniswood provides an utterly fascinating behind-the-scenes look at the British monarchy, from the realities of the royal chamber pot to bedchamber politics."—Amanda Foreman, author of Georgiana: Duchess of Devonshire

"Meticulously researched, rich in detail and hugely entertaining, Behind The Throne is an evocative feast of royal history, from the first Elizabeth to the present, at its page-turning best. From a master historian and story-teller, it is an absolute must for anyone interested in the British monarchy, past and present, and for any self-respecting history lover. A book I only wish I had written, I cannot recommend it highly enough."—Christopher Warwick, royal biographer and historian