Exact Thinking in Demented Times: The Vienna Circle and the Epic Quest for the Foundations of Science (Hardcover) 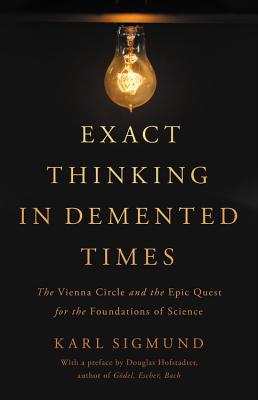 “When the heirs of physicists and philosophers Ernst Mach and Ludwig Boltzmann came together in Vienna, little did they realize that their intellectual enterprise would figure so greatly in the annals of history and science. Over the years, the group, corralled by Moritz Schlick and Hans Hahn, grew to include such names as Kurt Godel, Karl Popper, and Ludwig Wittgenstein. Sigmund provides a vivid account of the personalities involved in these debates on the philosophy of science and whether philosophy belongs in science, and breathes new life and energy into this important time period. In this extremely readable and accessible volume, Sigmund's familiarity with the Vienna Circle makes for fascinating observations about the people who made this part of science history possible.”
— Raul Chapa, Book People Bookstore, Austin, TX

Inspired by Albert Einstein's theory of relativity and Bertrand Russell and David Hilbert's pursuit of the fundamental rules of mathematics, some of the most brilliant minds of the generation came together in post-World War I Vienna to present the latest theories in mathematics, science, and philosophy and to build a strong foundation for scientific investigation. Composed of such luminaries as Kurt GÃ¶ and Rudolf Carnap, and stimulated by the works of Ludwig Wittgenstein and Karl Popper, the Vienna Circle left an indelible mark on science.

Exact Thinking in Demented Times tells the often outrageous, sometimes tragic, and never boring stories of the men who transformed scientific thought. A revealing work of history, this landmark book pays tribute to those who dared to reinvent knowledge from the ground up.

Karl Sigmund is a professor of mathematics at the University of Vienna. One of the pioneers of evolutionary game theory, he lives in Vienna.

"Sigmund's book will long stand as the most engaging and accessible history of that remarkable movement...This is history--serious and first-rate history--written like a novel...A masterpiece."—Physics Today

"Delightful... [Sigmund] has produced a stimulating account of the Circle, not only stating with clarity its ideas but also giving colorful portraits of and personal stories about its members."—Washington Post

"Karl Sigmund's fond and knowledgeable exploration of the ideas and members of the legendary Vienna circle between the two wars...contains stark warnings not only about demented times, but also about the possible costs of exact thinking."—Economist

"A gripping, yet cautionary history... Ultimately, Exact Thinking in Demented Times... constitutes a salient reminder of the ongoing need for collective rationality in times of ethical and methodological crisis."—Nature

"A brisk and engaging account of the volatile mix of characters that came together to form the Vienna Circle: their fierce intellectual battles over its main doctrines, their foibles and eccentricities, their 'collective eroticism,' and their humiliations (mainly by Wittgenstein) and occasional mental breakdowns... Gives a vivid picture of the 'demented times' in which they attempted to carry out their 'exact thinking,' chronicling how Vienna between the wars... descended from cultural vitality into Nazi barbarism."—New York Review of Books

"A valuable book...the translation (by Mr. Sigmund himself) is almost flawless."—Wall Street Journal

"Sigmund...makes excellent use of
the archival material available in Vienna.... He has a particular talent for
explaining the ideas--in physics, mathematics, and philosophy--very clearly."—New Criterion

"[Sigmund's] history is decades in the making and well worth
the wait for anyone interested in the development of Western philosophy."—MAA Reviews

"Sigmund follows the Vienna Circle...through one of the most turbulent times in the history of central Europe."—Nature Physics

"Encapsulating an effervescent
period, Sigmund's work will excite readers interested in the history of modern
philosophy and science"—Booklist

"The turn of the 20th century begat a significant rethinking in philosophy... The author, one of the pioneers of evolutionary game theory, traces these ideas through the members of the Vienna Circle, from informal pre-World War I gatherings through the group's formal inception in 1924 to its dissolution following Hitler's annexation of Austria...Many readers will agree that we are currently living in 'demented times,' and Sigmund adeptly lays out a history that has great relevance for today."—Kirkus (starred review)

"Sigmund...breathes new life and energy into this important time period. In this extremely readable and accessible volume, Sigmund's familiarity with the Vienna Circle makes for fascinating observations about the people who made this part of science history possible."—Library Journal

"There is no doubt that the Vienna Circle was an assemblage of some of the most impressive human beings who have ever walked the planet, and Karl Sigmund's book tells its story, and their stories, in a gripping and eloquent fashion."---Douglas Hofstadter, from the Preface

"Exact Thinking in Demented Times is filled with vivid and fascinating stories of intellectual genius flourishing in the midst of political chaos. Karl Sigmund succeeds in bringing the amazing individuals of the Vienna Circle to life. Highly recommended!"---Ian Stewart, author of Significant Figures

"Karl Sigmund's rich account of the Vienna Circle teems with insights into the thinking its leading lights, which included some of the most important philosophers and scientists of the 1920s and 30s. A superb book, so replete with inter-disciplinary delights that it will make its readers feel like polymaths."---Graham Farmelo, Fellow at Churchill College at the University of Cambridge and author of The Strangest Man