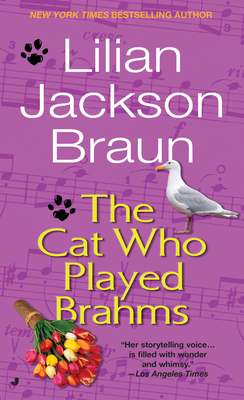 By Lilian Jackson Braun
$8.95
Not Available

This is book number 5 in the Cat Who... series.

A murder leaves Jim Qwilleran and his cats, Koko and Yum Yum, feeling out of tune in this New York Times bestselling mystery in the Cat Who series.

Is it just a case of summertime blues or a full-blown career crisis? Newspaper reporter Jim Qwilleran isn’t sure, but he’s hoping a few days in the country will help him sort out his life. With cats Koko and Yum Yum for company, he heads for a cabin owned by a longtime family friend named Aunt Fanny.

But from the moment he arrives, things turn strange. Eerie footsteps cross the roof at midnight. The townsfolk become oddly secretive. And then, while fishing, Qwilleran hooks on to a murder mystery. Soon Qwilleran enters into a game of cat and mouse with the killer, while Koko develops a sudden and uncanny fondness for classical music...

The history of Lilian Jackson Braun is perhaps as exciting and mysterious as her novels. Between 1966 and 1968, she published three novels to critical acclaim: The Cat Who Could Read Backwards, The Cat Who Ate Danish Modern, and The Cat Who Turned On and Off.  In 1966, the New York Times labeled Braun, “the new detective of the year.” Then, for reasons unknown, the rising mystery author disappeared from the publishing scene. It wasn’t until 1986 that Berkley Publishing Group reintroduced Braun to the public with the publication of an original paperback, The Cat Who Saw Red. Within two years, Berkley released four new novels in paperback and reprinted the three mysteries from the sixties. Since then, G.P. Putnam’s Sons has published seventeen additional novels in the Cat Who series. Braun passed away in 2011.

Praise for Lilian Jackson Braun and the Cat Who series

“The mix of crime and cats [is] catnip to readers who like both.”—Chicago Sun-Times

“Braun keeps both paws on the side of charming.”—Los Angeles Times