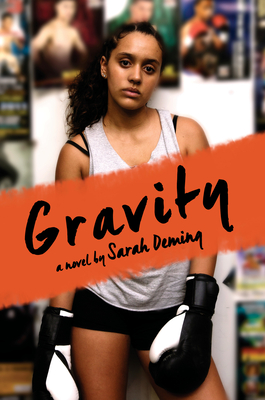 A. S. King meets Chris Crutcher in boxing journalist Sarah Deming's YA novel about a young female boxer who learns to fight for what she wants.

Gravity "Doomsday" Delgado is good at breaking things. Maybe she learned it from her broken home.

But since she started boxing with a legendary coach at a gym in Brooklyn, Gravity is finding her talent for breaking things has an upside. Lately, she's been breaking records, breaking her competitors, and breaking down the walls inside her. Boxing is taking her places, and if she just stays focused, she knows she'll have a shot at the Olympics.

Life outside the ring is heating up, too. Suddenly she's flirting (and more) with a cute boxer at her gym--much to her coach's disapproval. Meanwhile, things at home with Gravity's mom are reaching a tipping point, and Gravity has to look out for her little brother, Ty. With Olympic dreams, Gravity will have to decide what is worth fighting for.

Sarah Deming assisted on the New York Times bestselling sports memoir Eat & Run and wrote for CNBC's 2012 Olympics coverage. She is an HBO Boxing insider, as well as a senior boxing correspondent for Stiff Jab. Her essays have appeared in the Threepenny Review, the Guardian, Penthouse Forum, the Washington Post, HuffPost, WNYC.com, and the Morning News, and have been noted in Best American Essays and Best American Sportswriting. She's been awarded a Pushcart Prize and a MacDowell Fellowship. Before becoming a writer, Sarah was a chef, a yoga teacher, and a Golden Gloves boxing champion. She lives in Brooklyn with her husband, Ethan Iverson, and works with young boxers at Atlas Cops and Kids. Learn more about Sarah at sarahdeming.typepad.com or on Twitter at @sarahdeming.

"Readers will immediately stand in Gravity's corner as she battles distractions and fights against the odds in pursuit of her dreams. A riveting pugilistic must-read." —Kirkus, starred review

“Boxing is the real romance here; as with any romance, the reading pleasure lies not in genre surprises but in the way the story brings freshness and joy to the familiar turns.”  —Bulletin