How to Change Your Mind: What the New Science of Psychedelics Teaches Us About Consciousness, Dying, Addiction, Depression, and Transcendence (CD-Audio) 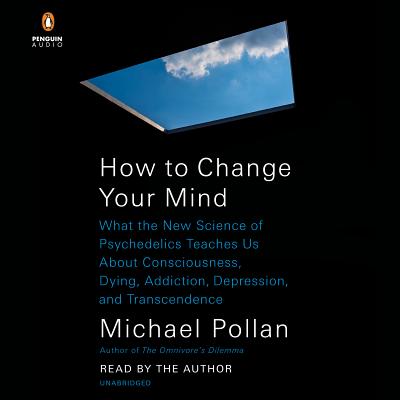 Psilocybin has been all the rage in Silicon Valley for years now. Pollan’s enthusiasm for psychedelic therapies is sure to spread the enthusiasm through the heartland, to the east coast. If you have ever been interested in expanding your mind How to Change Your Mind is a great way to armchair travel along with Pollan on his personal journey. -Justin, Atlanta

When Michael Pollan set out to research how LSD and psilocybin (the active ingredient in magic mushrooms) are being used to provide relief to people suffering from difficult-to-treat conditions such as depression, addiction and anxiety, he did not intend to write what is undoubtedly his most personal book. But upon discovering how these remarkable substances are improving the lives not only of the mentally ill but also of healthy people coming to grips with the challenges of everyday life, he decided to explore the landscape of the mind in the first person as well as the third. Thus began a singular adventure into various altered states of consciousness, along with a dive deep into both the latest brain science and the thriving underground community of psychedelic therapists. Pollan sifts the historical record to separate the truth about these mysterious drugs from the myths that have surrounded them since the 1960s, when a handful of psychedelic evangelists inadvertently catalyzed a powerful backlash against what was then a promising field of research.

A unique and elegant blend of science, memoir, travel writing, history, and medicine, How to Change Your Mind is a triumph of participatory journalism. By turns dazzling and edifying, it is the gripping account of a journey to an exciting and unexpected new frontier in our understanding of the mind, the self, and our place in the world. The true subject of Pollan's "mental travelogue" is not just psychedelic drugs but also the eternal puzzle of human consciousness and how, in a world that offers us both suffering and joy, we can do our best to be fully present and find meaning in our lives.

Michael Pollan is the author of eight books, including How to Change Your Mind, Cooked, Food Rules, In Defense of Food, The Omnivore’s Dilemma, and The Botany of Desire, all of which were New York Times bestsellers. He is also the author of the audiobook Caffeine: How Coffee and Tea Made the Modern World. A longtime contributor to The New York Times Magazine, Pollan teaches writing at Harvard University and the University of California, Berkeley. In 2010, Time magazine named him one of the one hundred most influential people in the world.

“Pollan’s deeply researched chronicle will enlighten those who think of psychedelics chiefly as a kind of punchline to a joke about the Woodstock generation and hearten the growing number who view them as a potential antidote to our often stubbornly narrow minds . . . engaging and informative.” —Boston Globe

“Michael Pollan’s How to Change Your Mind: The New Science of Psychedelics changed my mind, or at least some of the ideas held in my mind. . . . Whatever one may think of psychedelics, the book reminds us that the mind is the greatest mystery in the universe, that this mystery is always right here, and that we usually dedicate far too little time and energy to exploring it.” —Yuval Noah Harari, author of Sapiens and 21 Lessons for the 21st Century

“A deep dive into the history of psychedelics . . . . Deliciously trippy.” —NY Post

“Amid new scientific interest in the potential healing properties of psychedelic drugs, Pollan . . . sets about researching their history—and giving them a (supervised!) try himself.  He came away impressed by their promise in treating addiction and depression—and with his mind expanded.  Yours will be too.” —People

“Sweeping and often thrilling . . . . It is to Pollan’s credit that, while he ranks among the best of science writers, he’s willing, when necessary, to abandon that genre’s fixation on materialist explanation as the only path to understanding. One of the book’s important messages is that the therapeutic benefits of psychedelics, for the dying or seriously ill, can’t be separated from the mystical experiences to which they give rise.” —The Guardian

“Journalist Michael Pollan explored psychoactive plants in The Botany of Desire (2001). In this bold, intriguing study, he delves further…Pollan even ‘shakes the snow globe’ himself, chemically self-experimenting in the spirit of psychologist William James, who speculated about the wilder shores of consciousness more than a century ago.” —Nature, International Journal of Science

"Pollan, Cooked, 2013,  has long enlightened and entertained readers with his superbly inquisitive and influential books about food. He now investigates a very different sort of comestible, psychedelics (from the Greek: “mind manifesting”), and what they reveal about consciousness and the brain.  Pollan’s complexly elucidating and enthralling inquiry combines fascinating and significant history with daring and resonant reportage and memoir, and looks forward to a new open-mindedness toward psychedelics and the benefits of diverse forms of consciousness.” —Booklist (starred review)

“Pollan, Cooked, shifts his focus to other uses of plants in this brilliant history of psychedelics across cultures and generations, the neuroscience of its effects, the revival of research on its potential to heal mental illness—and his own mind-changing trips . . . . This nuanced and sophisticated exploration, which asks big questions about meaning-making and spiritual experience, is thought-provoking and eminently readable.” —Publishers Weekly (starred review)

“A trip well worth taking, eye-opening and even mind-blowing.” —Kirkus (starred review)

“Known for his writing on plants and food, Michael Pollan . . . brings all the curiosity and skepticism for which he is well known to a decidedly different topic . . . How to Change Your Mind beautifully updates and synthesizes the science of psychedelics, with a highly personalized touch.” —Science Magazine

“I've never regretted my adolescent use of LSD, but reading this fascinating, lucid, wise and hopeful book did make me wonder if those drug experiences weren't another example of youth wasted on the young. Michael Pollan, who waited until he was a grownup to experiment, is the perfect guide to today’s dawning psychedelic renaissance.” —Kurt Andersen, author of Fantasyland

“Michael Pollan masterfully guides us through the highs, lows, and highs again of psychedelic drugs. How to Change Your mind chronicles how it’s been a longer and stranger trip than most any of us knew.” —Daniel Goleman, co-author Altered Traits: Science Reveals How Meditation Changes Your Mind, Brain and Body

“Very few writers, if any, have the gravitas and journalistic cred to tackle this explosive subject—from both the outside and the inside—extract it from its nationally traumatic and irrationally over reactive past, and bring both reason and revelatory insight to it. Michael Pollan has done just that. This is investigative journalism at its rigorous and compelling best—and radically mind opening in so many ways just to read it.” —Jon Kabat-Zinn, founder of mindfulness-based stress reduction, and author of Full Catastrophe Living and Coming to Our Senses

“Michael Pollan assembles a great deal of information here on the history, science, and effects of psychedelics. I found his frank recounting of his recent experiences with LSD, psilocybin, and toad venom most revealing. They appear to have softened his materialistic views and opened him to the possibilities of higher consciousness. He did, indeed, change his mind.” —Andrew Weil, author of The Natural Mind and 8 Weeks to Optimum Health

"Do psychedelics open a door to a different reality, or is it just the same-old, same-old reality seen through a different set of lenses? I quickly became engrossed in Pollan’s narrative—the intersection of science, consciousness-enhancing, and government prohibition. But at the center of Pollan’s story is the greatest conundrum of all—why should substances that have been so beneficial to so many people, be the focus of crazy criminal penalties? Why, indeed.” —Errol Morris

“Michael Pollan has applied his brilliant mind and fastidious prose to the Mind itself, specifically the modes by which psychedelic substances temporarily obliterate the ego and engender deep spiritual connectedness to the universe. Michael walks the tight-rope between an objective ‘reporter’ and a spiritual pilgrim seeking insight and sustenance from psychedelics, and his innocence and integrity serve as a balance bar between cynicism and partisan affirmation. His success here places these drugs and what they do at the center of a potential revolution in medicine. It’s an extraordinary achievement, and no matter what you may think you know about psychedelics, if you even know the word, you should read this book.” —Peter Coyote, author and Zen Buddhist Priest

“After 50 years underground, psychedelics are back. We are incredibly fortunate to have Michael Pollan be our travel guide for their renaissance. With humility, humor, and deep humanity, he takes us through the history, the characters, and the science of these “mind manifesting” compounds. Along the way, he navigates the mysteries of consciousness, spirituality, and the mind. What he has done previously for gardeners and omnivores, Pollan does brilliantly here for all of us who wonder what it means to be fully human, or even what it means to be." —Thomas R. Insel, MD, former director of National Institute of Mental Health and co-founder and president of Mindstrong Health

“A rare and utterly engrossing exposition that will most certainly delineate a fundamental change in the understanding of the human mind and the mystery of consciousness. Pollan previously reshaped our knowledge of earthly landscapes in his writings. With this book, he transforms our understanding of the innerscape, the unbounded world we occupy every conscious second of our life experienced by thoughts, suffering, awareness, joy, and reasoning. This is more than a book—it is a treasure." —Paul Hawken, author of Blessed Unrest