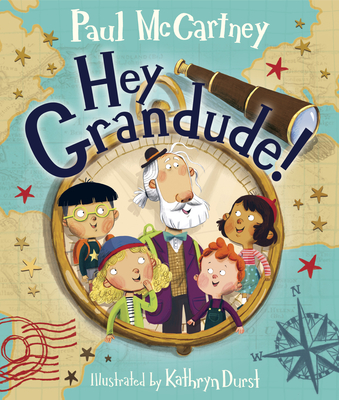 This #1 New York Times bestselling picture book adventure from Paul McCartney is perfect for Father’s Day or any day when you’re looking to celebrate the fun that grandparents and grandkids can get up to!

Meet Grandude--a super-cool grandfather who is an intrepid explorer with some amazing tricks up his sleeve. Grandude is a one-of-a-kind traveler! With his magic compass, he whisks his four grandkids off on whirlwind adventures, taking them all around the globe. Join them as they ride flying fish, dodge stampedes, and escape avalanches! Brought to life with gloriously colorful illustrations from talented artist Kathryn Durst, Hey Grandude is the perfect bedtime story for little explorers and an ideal gift for Father’s Day.

Since writing his first song at the age of fourteen, Paul McCartney has had an impossibly prolific and singularly influential career. In the 1960s, Paul changed the world forever with The Beatles. He didn't stop there, continuing to push boundaries as a solo artist, with Wings, and through collaborations with numerous world-renowned artists. He has received eighteen Grammys, and in 1997 was knighted by Her Majesty the Queen for his services to music. Paul's most recent album, Egypt Station, was his first one to debut at #1 on the Billboard charts.

Paul is a dedicated philanthropist, passionately advocating for many causes, including animal rights and environmental issues. He's also a very proud grandfather.

Kathryn Durst is a graduate of Sheridan College in Ontario, Canada. With a background in animation, she has interned with Pixar Animation Studios, in addition to working with various children's book publishers. When she is not illustrating books, she can be found playing the accordion, growing vegetables, folk dancing, or putting on shadow puppet shows. She lives in Toronto, Canada, with her grumpy mini dachshund named Chili Dog.

“Hanging out with grandad turns out to be anything but boring…. Readers will roll up for repeats, and not just because of the name on the cover. —Kirkus

“This picture book debut from the musical icon hits all the right notes in the tale of a cool grandfather, his magical compass, and his grandchildren." —Publishers Weekly

"McCartney does a fine job of upping the ante at each stop... the diverse group of chillers dash, crash, scurry, worry, and laugh about the magical events. In the end, it's golden slumbers, but the promise of future adventures is in the air.” — Booklist