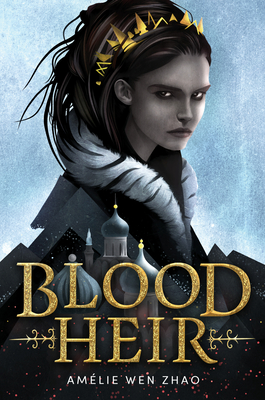 This is book number 1 in the Blood Heir series.

“This dark Anastasia retelling gives the lost princess a monstrous new tale that is as gruesome as her realistic history. With the power to manipulate certain elements, Affinities are regarded as demons in the kingdom of Cyrilia. Ana has been a smudge on the royal family’s name due to her affinity for blood and now must prove her innocence after being framed for the king’s murder. Ana realizes that not only must she hunt down her father’s murderer, she must also fight for those who have been deemed monsters. Amélie has crafted a world full of diverse and complex characters coping with oppression, tragedy, and the painful decisions that come with fighting for something bigger than oneself.”
— Kiera Thompson, The River's End Bookstore, Oswego, NY

The first book in an epic new series about a princess hiding a dark secret and the con man she must trust to clear her name for her father's murder.

In the Cyrilian Empire, Affinites are reviled. Their varied gifts to control the world around them are unnatural—dangerous. And Anastacya Mikhailov, the crown princess, has a terrifying secret. Her deadly Affinity to blood is her curse and the reason she has lived her life hidden behind palace walls.

When Ana's father, the emperor, is murdered, her world is shattered. Framed as his killer, Ana must flee the palace to save her life. And to clear her name, she must find her father's murderer on her own. But the Cyrilia beyond the palace walls is far different from the one she thought she knew. Corruption rules the land, and a greater conspiracy is at work—one that threatens the very balance of her world. And there is only one person corrupt enough to help Ana get to its core: Ramson Quicktongue.

A cunning crime lord of the Cyrilian underworld, Ramson has sinister plans—though he might have met his match in Ana. Because in this story, the princess might be the most dangerous player of all.

“Cinematic storytelling at its best.”—Adrienne Young, New York Times bestselling author of Sky in the Deep and The Girl the Sea Gave Back

“Zhao is a master writer who weaves a powerful tale of loyalty, honor, and courage through a strong female protagonist. . . . Readers will love the fast-paced energy and plot twists in this adventure-packed story.”—SLJ

Amélie Wen Zhao was born in Paris and grew up in Beijing in an international community. Her multicultural upbringing instilled in her a deep love of global affairs and cross-cultural perspectives. She seeks to bring this passion to her stories, crafting characters from kingdoms in different corners of the world. She attended college in New York City, where she now lives. Amélie is the author of Blood Heir and Red Tigress.

“Zhao shines in the fast-paced and vivid combat scenes, which lend a cinematic quality that pulls readers in.”—NYT Book Review

“Blood Heir is cinematic storytelling at its best. A stunning new voice in YA, Amélie Wen Zhao has drawn characters who are as complex and captivating as the fantastical world she’s built. Get ready for a retelling like you’ve never seen before.”
—Adrienne Young, New York Times bestselling author of Sky in the Deep and The Girl the Sea Gave Back

“Sure to keep readers turning pages…. Perfect for fans of Amy Tintera or Sarah J. Maas, but readers should prepare for plenty of heartbreak.” — Booklist

"[A] pointed exploration into the consequences of exploitation and the defining nature of choices." — Publishers Weekly

"Ana is not the typical damsel in distress." — Kirkus Reviews