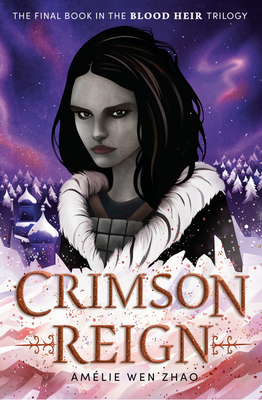 The Red Tigress, Anastacya Mikhailov, has lost the gift she was only beginning to realize deﬁned her. Stolen from her during the battle in Bregon, her blood Affinity rests with Sorsha Farrald, a dangerous Affinite who is on the run, headed straight to Cyrilia and to Ana's aunt...the Empress Morganya.

Though she is weakened, Ana's course remains true--yet her return to her homeland reveals a Cyrilia on the brink of collapse. Morganya's tyrannical rule has transformed into a sinister quest for unquestioned authority, and she has set her sights far beyond Cyrilia. Morganya seeks a legendary ancient power, rumored to have once belonged to the Deities themselves. If she can locate it, she can rule the world.

What's more, Ana's allies, the insurgent Affinite rebels known as the Redcloaks, no longer support her. For their allegiance is with the people--and there can be no equality with a monarchy.

Ana faces enemies at every turn, and every day without her Affinity brings her closer to death. Yet she is determined to liberate her people and vanquish the legacy of her own imperial bloodline--the inequality sewn into the fabric of her land. Her only hope lies in the navy she recruited in Bregon, the courage of her band of friends, and the cunning crime-lord-turned-captain she's fallen for.

Amélie Wen Zhao was born in Paris and grew up in Beijing in an international community. Her multicultural upbringing instilled in her a deep love of global affairs and cross-cultural perspectives. She seeks to bring this passion to her stories, crafting characters from kingdoms in different corners of the world. She attended college in New York City, where she now lives. Amélie is the author of the Blood Heir trilogy Blood Heir, Red Tigress, and Crimson Reign.