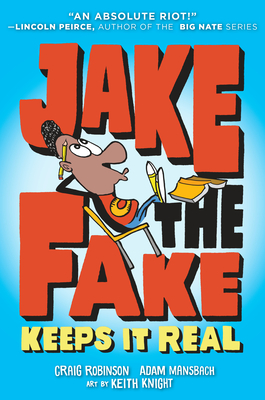 Jake can barely play an instrument, not even a kazoo. And his art? It’s better suited for Pictionary than Picasso. Which is a real problem because Jake just faked his way into the Music and Art Academy for the gifted and talented (and Jake is pretty sure he is neither). More jokester than composer, Jake will have to think of something quick before the last laugh is on him.

Featuring more than 160 illustrations, Jake the Fake is sure to bring the laughs with his hilarious high jinks!

Comedian, musician, and actor Craig Robinson transitions his flair for humor from the screen to the page in his authorial debut. He is best known for his work on NBC’s The Office, Hollywood comedy blockbusters This Is the End, Hot Tub Time Machine, and Pineapple Express, and the upcoming drama Morris from America. Robinson pulls from his life’s most hilarious moments and his experience attending Chicago’s first public magnet school to bring Jake the Fake to life. Robinson continues to act, perform, and cheer on the White Sox.

Adam Mansbach is a novelist, screenwriter, cultural critic, and humorist. The #1 New York Times bestselling author of Go the F*ck to Sleep and You Have to F*cking Eat, Mansbach has recently expanded his writing repertoire to include his debut thriller The Dead Run and middle-grade novel Benjamin Franklin: Huge Pain in My . . . His novel Rage Is Back was an NPR Best Book of the Year. Mansbach’s work has also appeared on NPR’s All Things Considered.

"Keith Knight is mapping out a previously unknown vector of the vast cartoon universe." --Garry Trudeau, creator of Doonesbury

"It's hard to make a comic that is this funny while also so frequently profound.... This is the work of a master." --Dave Eggers, author of A Heartbreaking Work of Staggering Genius

Keith Knight is a rapper, social activist, father, and educator. He’s also one of the most highly regarded cartoonists in America, and the creator of three popular comic strips: the Knight Life, (th)ink, and the K Chronicles. Knight is also the recipient of the the NAACP History Maker award. His art has appeared in various publications worldwide, including the Washington Post, Daily KOS, San Francisco Chronicle, Salon.com, Ebony, ESPN the Magazine, L.A. Weekly, MAD Magazine, and The Funny Times.

"A fast and funny alternative to the Wimpy Kid." -Kirkus Reviews

"Robinson and Mansbach amp up the laughs in this wry novel." -Booklist

"Jake showcases an unforgettable kid whose imagination will blow your mind." -Essence

"Jake wouldn't worry about making it through sixth grade if he knew the all-star team he has behind his adventures. The laughs you'll have reading this book are definitely not fake!" -Jeffrey Brown, author of Lucy & Andy Neanderthal and Jedi Academy

"Everything about this book is funny. OK, maybe not the page numbers. But the words and pictures are hilarious; I laughed until boogers came out of my nose. (Don't worry, I put them back.)" -Dave Barry, author of Worst Class Trip Ever