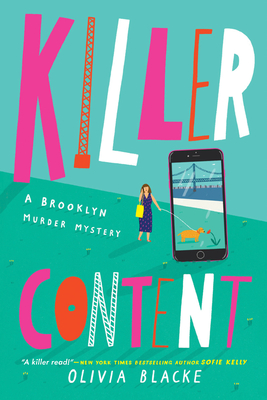 This is book number 1 in the A Brooklyn Murder Mystery series.

It's murder most viral in this debut mystery by Olivia Blacke.

Bayou transplant Odessa Dean has a lot to learn about life in Brooklyn. So far she's scored a rent free apartment in one of the nicest neighborhoods around by cat-sitting, and has a new job working at Untapped Books & Café. Hand-selling books and craft beers is easy for Odessa, but making new friends and learning how to ride the subway? Well, that might take her a little extra time.

But things turn more sour than an IPA when the death of a fellow waitress goes viral, caught on camera in the background of a couple's flash-mob proposal video. Nothing about Bethany's death feels right to Odessa--neither her sudden departure mid-shift nor the clues that only Odessa seems to catch. As an up-and-coming YouTube star, Bethany had more than one viewer waiting for her to fall from grace.

Determined to prove there's a killer on the loose, Odessa takes matters into her own hands. But can she pin down Bethany's killer before they take Odessa offline for good?

Brooklyn Murder Mysteries author Olivia Blacke writes quirky, unconventional, character-driven cozy mysteries. After shuffling around the U.S.A. from Hawaii to Maine, she currently resides with her husband and their roly-poly rescue puggle, but is forever homesick for NYC. In addition to writing, disappearing into a good book, and spending way too much time on social media, she enjoys SCUBA diving, crocheting, collecting tattoos, and baking dog cookies.

"Killer Content puts together all of my favorite things: an intriguing plot, a great cast of supporting characters, and a vivid setting. Huckleberry the dog even won over this cat-lover! Odessa has an unconventional, appealing voice and she’s no shrinking violet. I laughed out loud in places. Killer Content is a killer read!"—Sofie Kelly, New York Times bestselling author

“Blacke pens a delightful main character in boots-wearing Odessa Dean, a rural Louisiana transplant to Brooklyn. I loved this immersive whodunnit with its diverse cast and unique social media theme. #killermystery” –Jennifer Chow, author of Mimi Lee Gets a Clue

"Sparkling with delightful dry wit, this tale of a small town Southern girl taking on the big city is a debut that satisfies from beginning to end."—Laurie Cass, national bestselling author of Gone with the Whisker

"In lieu of the standard cute cop–vs.–talented amateur standoff, Blacke’s quirky characters and offbeat plot twists allow her debut to work some pleasing variations on the theme. Refreshing fare."—Kirkus

"Cozy fans will enjoy seeing Brooklyn (and Brooklynites) through spunky outsider Odessa’s eyes as she gathers the evidence to prove it. Distinctive characters enhance the lively plot. Blacke is off to a promising start."—Publishers Weekly

"This debut mystery introduces a spirited amateur sleuth with a unique voice in an atmospheric, upbeat mystery with a strong social media emphasis. Unconventional characters and two charming animals mark the launch of a series with great possibilities."—Library Journal