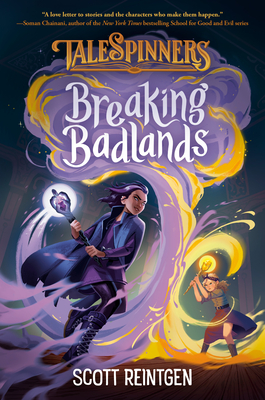 This is book number 3 in the Talespinners series.

Video game fans and book lovers alike will be swept into an undercover mission that might destroy the balance between good and evil forever in the last Talespinners adventure, perfect for readers of The Land of Stories.

Having saved Imagination twice now, Indira is on a well-earned vacation when she is kidnapped by the Anti-Heroes. The covert group has one goal: overthrow the tyrannical leader of Fester and Antagonist Academy. After they plead their case, Indira agrees to join their secret mission and go undercover as a student at the legendary school for villains-in-training—where she gets drawn into a virtual warfare competition known as the Badlands.

Facing monster teachers, plotting classmates, distracting love interests, and combative old foes is all second nature to a hero like Indira. But what happens when that heroic nature is turned against her like a weapon? Can Indira get to the bottom of what's going on in Fester before this virtual battlescape spills over into a real war for ultimate control of Imagination?

Scott Reintgen is a former public school teacher from North Carolina. He survives mostly on cookie dough, which he is told is the most important food group. When he's not writing, he uses his imagination to entertain his wife, Katie, and their sons, Henry and Thomas. Scott is the author of the middle-grade Talespinners series, as well as the Nyxia Triad and Ashlords duology for young adults. You can follow him on Facebook, Instagram, and Twitter at @Scott_Thought.

"Fast-paced chapters of mystery, suspense, twists, and turns, will keep pages turning long into the night, and the satisfying ending--or rather, beginning--to Indira's story will leave readers eager for a return trip to Fable." --Booklist on Saving Fable

"Will draw in reluctant and fervent readers alike....Thankfully, this is the first in a series." -School Library Journal on Saving Fable