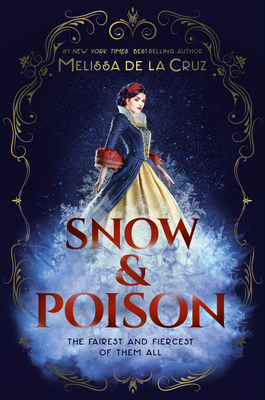 Known as Snow White, Lady Sophie has led a sheltered life in the mountains of Bavaria. Until now. Her father, the widowed Duke Maximilian, is at last remarrying, and on the day of his historic wedding, Sophie is making her high-society debut.

At the ball, Sophie charms the dashing Prince Philip, heir to the Spanish throne. But as Philip and Sophie start falling deeply in love, the king of Spain loses his temper. His wish is that Philip would marry a princess. And now, his command is Sophie’s death.

In a quest for survival, Sophie seeks refuge in the home of seven orphans, the counsel of a witch, and the safety of her blade. With the looming threat of war upon her duchy, Sophie must ponder: Can she do right by her home and honor her heart’s desire?

Melissa de la Cruz is the #1 New York Times, USA Today, Wall Street Journal, Los Angeles Times, and Publishers Weekly internationally bestselling author of many critically acclaimed books for readers of all ages, including the Alex & Eliza trilogy, Disney's Descendants novels, the Blue Bloods series, and the Summer on East End series. Her books have sold over eight million copies, and the Witches of East End series became an hour-long television drama on the Lifetime network. Visit her at melissa-delacruz.com