What We Harvest (Hardcover) 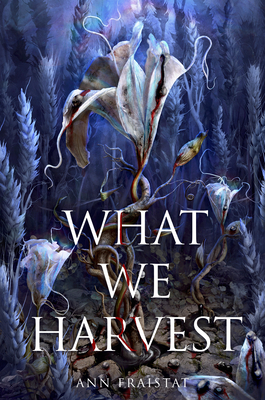 For fans of Wilder Girls comes a nightmarish debut guaranteed to keep you up through the night, about an idyllic small town poisoned by its past, and one girl who must fight the strange disease that's slowly claiming everyone she loves.

Wren owes everything she has to her hometown, Hollow’s End, a centuries-old, picture-perfect slice of America. Tourists travel miles to marvel at its miracle crops, including the shimmering, iridescent wheat of Wren’s family’s farm. At least, they did. Until five months ago.

That’s when the Quicksilver blight first surfaced, poisoning the farms of Hollow’s End one by one. It began by consuming the crops, thick silver sludge bleeding from the earth. Next were the animals. Infected livestock and wild creatures staggered off into the woods by day—only to return at night, their eyes fogged white, leering from the trees.

Then the blight came for the neighbors.

Wren is among the last locals standing, and the blight has finally come for her, too. Now the only one she can turn to is her ex, Derek, the last person she wants to call. They haven’t spoken in months, but Wren and Derek still have one thing in common: Hollow’s End means everything to them. Only, there’s much they don’t know about their hometown and its celebrated miracle crops. And they’re about to discover that miracles aren’t free.

Their ancestors have an awful lot to pay for, and Wren and Derek are the only ones left to settle old debts.

Ann Fraistat is an author, playwright, and narrative designer. Her co-author credits include plays such as Romeo & Juliet: Choose Your Own Ending, and alternate reality games sponsored by the National Science Foundation. Born and raised in Maryland, Ann lives with her husband and ever-adorable cats, Ollie and Sophie. What We Harvest is her debut novel.

"Clever, grotesque, and oozing with atmosphere, What We Harvest is a delightful, page-turning debut. Fraistat masterfully blends horror, fantasy, and science into a tale brimming with slow-creeping dread and explosive, long-buried secrets. I devoured it in one sitting." —Allison Saft, author of Down Comes the Night

"Eerie and beautiful, What We Harvest is a novel that will sink into your roots before it devours you whole. Fraistat's prose is both lyrical and haunting, and she crafts a story that breaks your heart and heals it in equal turns. Horrifying but ultimately hopeful, this novel will be horror readers' next obsession." —Courtney Gould, author of The Dead and the Dark

"Fraistat proves a deft hand at both slow-burn suspense and body horror…an engrossing read." —The Bulletin

“Dazzling and dreadful. What We Harvest grabbed me by the throat and wouldn't let go.” —Erin A. Craig, New York Times bestselling author of House of Salt and Sorrows

"Fast-paced and oh-so-creepy, with a festering secret at its center, What We Harvest is the rural zombie novel I never knew I wanted." —Erica Waters, author of Ghost Wood Song and The River Has Teeth

"Wilder Girls' successor is finally here—and it's eerier and more atmospheric than any reader could hope for!" —Laura Graveline, Brazos Bookstore, Houston, TX

“Unputdownable, unforgettable, and gorgeously written. A must-read book.” —Ashley Winstead, author of In My Dreams I Hold a Knife