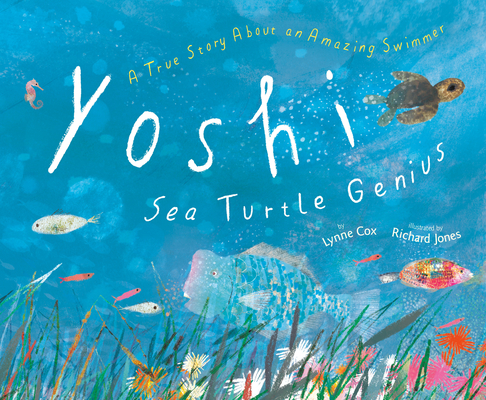 In this picture book that is both heartwarming and exciting, join Yoshi, a sea turtle, on her remarkable journey as she swims farther than any animal in recorded history--23,000 miles!--to return to the beach where she first hatched, to lay her own eggs.

Inside every loggerhead turtle is genius: the ability to find their first home, no matter how far away. Follow one, from her birth on a beach in Australia...to her trip across an ocean filled with sharks and seahorses and much more...to her rescue from a net by a fisherman, who names her Yoshi...to her rehabilitation at an aquarium...to her record-breaking swim across the Indian Ocean to the beach on which she hatched, to lay her eggs.

Written by Lynne Cox, also a record-breaking swimmer, here is the true story of a sea turtle who swam the longest distance of any animal in recorded history.

Lynne Cox is a legendary long-distance open-water swimmer. She is the author of the children's book Elizabeth, Queen of the Seas, which received four starred reviews, as well as several books for adults, including South with the Sun and the New York Times bestsellers Grayson and Swimming to Antarctica. She is also a contributor to the New Yorker. Lynne has set world records for swimming, and in 2000 she was inducted into the International Swimming Hall of Fame.

★ "A mesmerizing glimpse at the miracles of the natural world." -Kirkus Reviews, starred review

★ “…A succinctly told story that’s satisfying in its full-circle itinerary and its appreciation of the sea turtle’s innate 'genius'.” -Publishers Weekly, starred review

"A brilliant tribute to a marvel of the natural world." -Booklist