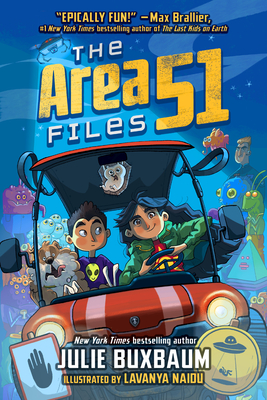 When Sky Patel-Baum is sent to live with her mysterious uncle, she didn’t imagine she’d end up here: Area 51. A top-secret military base with a bajillion rules and so classified not even the president knows its secrets.

Also, it turns out the place is full of aliens. Lots and lots of aliens. But they prefer to be called Break Throughs, thank you very much.

As Sky sets out to explore her extraordinary new home with her pizza-obsessed pet hedgehog Spike, she meets her otherworldly next-door neighbor Elvis and his fluffy pup, Pickles. But something mysterious is afoot in Area 51. Some of the Break Throughs have gone missing… at the exact same time Sky arrived.

Where could they be? How can Sky and her uncle convince everyone they had nothing to do with the disappearance? And why does the macaroni and cheese at Area 51 Middle have eyeballs in it? New best friends Sky, Elvis, Spike, and Pickles try to crack the case, but the clock is ticking…

JULIE BUXBAUM is the New York Times bestselling author of the young adult novels Tell Me Three Things, What to Say Next, Hope and Other Punch Lines, and Admission. She also wrote the critically acclaimed The Opposite of Love and After You. She lives in Los Angeles with her husband and two children. She frequently has UFOs (Unidentified Food Objects) all over her shirt.

LAVANYA NAIDU is a children’s book illustrator and animator, born and raised in Kolkata. A graduate of the National Institute of Design, she has worked on numerous children’s books as well as animation projects. She currently lives in Melbourne and recently completed her role as the head of design on the animated kids series The Strange Chores (season 2) at 12field Animation. In her spare time, Lavanya enjoys collecting dinosaur models and befriending dogs.

"Kids are going to love this unputdownable, extra-fun, extra-hilarious, extra-mysterious, extraterrestrial adventure."—Sarah Mlynowski, New York Times bestselling author of the Whatever After series and the Upside-Down Magic series