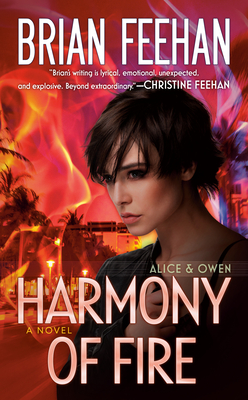 This is book number 1 in the Alice & Owen series.

The We—beings who existed long before humans ever did, filled with powerful magic—walk among us. Owen and Alice are both etherealists—rare humans born with magic who are targets for those We that wish to take it from them. At nine years old and against her will, Alice’s soul was tied to one such powerful and evil We. She escaped and was trained to be a weapon so she might one day break the bond and safely return home. Everything is going to plan…until she meets Owen.

Owen is a musician who is trying to outrun his past while keeping those around him safe in an increasingly dangerous world. Owen keeps them on the move until a band of hunters crosses their path. Owen must go home—a place he swore he’d never return to—and seek protection from the We who could destroy them. And then he meets Alice. Only through finding each other do either Alice or Owen have a chance of survival.

Brian Feehan lives in his mind, creating vibrant characters who talk very loudly and far too often. When real life comes knocking, it is likely to be the love of his life, Michelle, or their son, Dylan. Together, the three of them live on the northern coast of California, which is far different than any other part of California.

Brian is fascinated by both the written word and learning new subjects. He is always up for a laugh, a game, or a drink with friends and family. He is also the son of #1 New York Times bestselling author Christine Feehan, who started his training to become an author before he was old enough to walk. For more information about Brian and his novels, please visit www.brianfeehanauthor.com and join his mailing list.