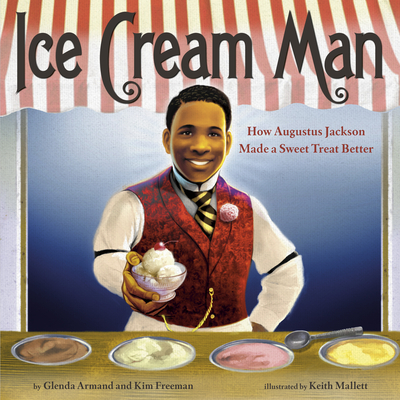 Discover the inspiring story of Augustus Jackson, an African American entrepreneur who is known as "the father of ice cream," in this beautifully illustrated picture-book biography.

Augustus Jackson was born in 1808 in Philadelphia. While most African Americans were enslaved at that time, in Pennsylvania, slavery was against the law. But while Augustus and his family were free, they were poor, and they depended on their garden and their chickens for food. Augustus enjoyed helping his mom prepare meals for their family. He dreamed of becoming a professional cook, and when his mom suggested he may be able to make meals for the president one day, Augustus didn’t waste any time in making that dream a reality. In 1820, when he was only twelve years old, he set off for Washington, DC. He applied to work in the White House, where the head cook offered him a job as a kitchen helper. After five years of working hard, Augustus, or Gus, was promoted to cook. He went on to serve presidents James Monroe, John Quincy Adams, and Andrew Jackson.

During his time at the White House, Augustus became an expert at making a popular egg-based dessert. He soon made an eggless version—known to us today as ice cream—and left the White House determined to make and sell the frozen treat to everyone, not just the wealthy. Gus headed back home to Philadelphia, and in 1830, he opened his very own ice cream parlor. He devised a way to keep the ice cream frozen so that it could be shipped and sold to other businesses. Gus also began adding rock salt to the ice that he used to make his ice cream, which made the mixture freeze more quickly. This allowed him to speed up his production process. He created more ice cream with new flavors, and soon he was shipping product via train to places like New York City, which was 100 miles away. Gus’s dream had come true, and better yet, he had brought smiles to many faces.

Shining a light on a little-known visionary, this inspiring picture-book biography includes an afterword, a list of sources, and an easy-to-follow recipe so readers can make their own delicious ice cream!

Glenda Armand lives in Los Angeles and has had a long career as a teacher and school librarian. She now devotes her time to writing picture-book biographies of people who overcame big obstacles to do great things. Glenda is the author of the award-winning Love Twelve Miles Long, Ira’s Shakespeare Dream and Song in a Rainstorm: The Story of Musical Prodigy Thomas “Blind Tom” Wiggins, as well as Black-Eyed Peas and Hoghead Cheese. When she is not writing, Glenda can be found in her garden tending her roses and succulents. Her favorite ice cream flavor is butter pecan. You can learn more about her at glenda-armand.com.


Kim Freeman is a children’s book writer who lives in Bloomington, Indiana. She enjoys writing books that inspire children to follow their dreams. Ice Cream Man is her debut picture book. Kim holds a bachelor’s degree in journalism from Indiana University. She likes to relax by visiting museums and zoos with her family and loves discovering new ice cream shops. She is a triple-scoop fan of chocolate peanut butter. You can visit her online at kimfreeman.us.

Keith Mallett has been drawing and painting for as long as he can remember. The NAACP Image Award–nominated artist and designer has created posters and fine art prints for more than forty years. In 2017, he created the Google Doodle commemorating Martin Luther King Day. He has illustrated a number of picture books, including Curve & Flow (written by Andrea J. Loney), When Langston Dances (written by Kaija Langley), Sing a Song (written by Kelly Starling Lyons), and Take a Picture of Me, James VanDerZee! (written by Andrea J. Loney). Keith Lives in San Diego with his wife and German Shepherd.