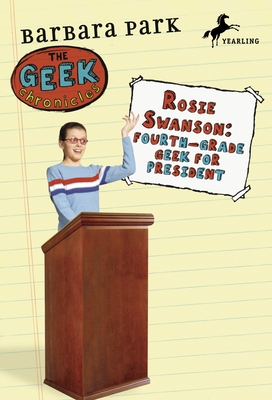 By Barbara Park
$8.95
Not Available

Sure, she wears geeky-looking glasses and she tattles on her classmates. But, hey, snitching has its good side. Thanks to Rosie, Ronald Milligan has stopped blowing his nose in the water fountain. And now, Rosie is determined to do even more for her classmates -- by becoming president of the fourth grade!

With the help of her two best (and only) friends, Rosie devises a brilliant campaign to defeat the two most popular kids in her class: soccer star Alan Allen and model-wannabe Summer Lynne Jones. But when despicable Alan steals Rosie's unbeatable campaign slogans, it's time to watch out! Nosy Rosie is on the warpath!

BARBARA PARK is best known as the author of the wildly popular New York Times bestselling Junie B. Jones series, which has kept kids (and their grown-ups) laughing—and reading—for over two decades. Beloved by millions, the Junie B. Jones books have been translated into multiple languages and are a time-honored staple in elementary school classrooms around the world. Every bit as funny as her best-known character, Barbara once said, “There are those who believe that the value of a children’s book can be measured only in terms of the moral lessons it tries to impose or the perfect role models it offers. Personally, I happen to think that a book is of extraordinary value if it gives the reader nothing more than a smile or two. In fact, I happen to think that’s huge.”

Barbara Park is also the author of award-winning middle grade novels and bestselling picture books, including Skinnybones, Mick Harte Was Here, and The Kid in the Red Jacket.

"Park, as usual, is right on target with kids' problems, and Rosie learns some pretty tough things about friendship and popularity. With thoroughly believable characters and plenty of laugh-out-loud lines, her experience makes for a very good read."--Booklist