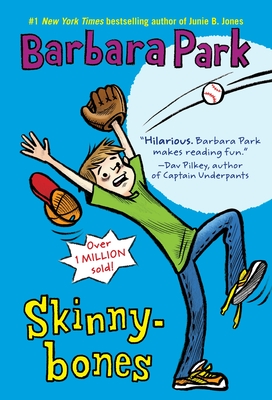 This is book number 2 in the Skinnybones Series series.

If you thought Junie B. Jones was FUNNY—catch more laughs from New York Times bestselling author Barbara Park with Skinnybones! Just right for fans of Diary of a Wimpy Kid and I Funny, Skinnybones has been a kid and teacher favorite for almost thirty years and has sold over 1 MILLION copies!

Play ball??? Alex Frankovitch is the smallest, second-worst kid on his team. But he has a MAJOR-LEAGUE-sized mouth. And it gets him into MAJOR-LEAGUE trouble! Even Alex knows he’s gone too far when he brags his way into a pitching contest with T.J. Stoner, the best player—and BIGGEST jerk—in the whole school (and maybe the whole world!). Can Alex talk his way out this mess? Or is he in for the GRAND SLAM of all humiliations? Find out in the award-winning, laugh-out-loud novel from the New York Times bestselling author of Junie B. Jones!

“Park is one of the funniest writers around. Skinnybones equals tickled funnybones.” —Booklist

“Hilarious! Even if you don’t know center field from first base this story will keep you laughing.” —Children’s Book Review Service

“Park writes…in a way that touches reality, but makes the reader double over with laughter.” —Chicago Sun-Times

BARBARA PARK is beloved by millions as the author of the wildly popular New York Times bestselling Junie B. Jones series, which has been translated into multiple languages and is a time-honored staple in elementary school classrooms around the world. She is also the author of award-winning middle-grade novels and bestselling picture books, including Skinnybones, Almost Starring Skinnybones, Mick Harte Was Here, and The Kid in the Red Jacket. Barbara died in 2013, but her legacy lives on in the laughter her books give to readers all over the world.

"Barbara Park is one of the funniest writers around"-Booklist