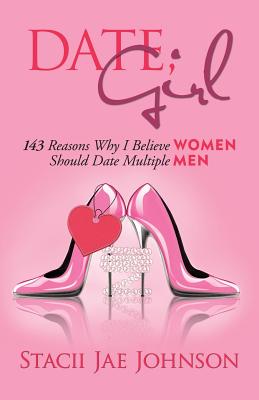 When it comes to picking the right career, shoes or wine, we demand choices. So why is it that we don't think twice about giving away the most precious gift a single woman has to give monogamy, and all that it implies, to a man who has not yet shown himself to be deserving of it? If you're putting the wants and needs of a man you hardly know before your own because you think or hope he's "the one;" if dating has become an agony of second-guessing yourself and over-analyzing every text, phone call and dinner conversation; if you are constantly questioning where things are going then this is the dating handbook you've been waiting for. Alternately insightful and hilarious, Stacii Jae Johnson shares excerpts from her own dating diary, as well as her 143 reasons why she believes it is important for the single girl to date multiple men simultaneously. Date, Girl will not only make you laugh, it will shake up everything you thought you knew about dating, shifting your focus along the way from finding Mr. Right to loving, respecting, honoring and empowering yourself.

Stacii Jae Johnson, founder of The Single Girls Club, is also an actress, radio personality, television host, lifestyle influencer and women's empowerment advocate who is vastly becoming the "go-to" for all things single girl. She is the star of BET Networks' NEW hit show, Executive Produced by Queen Latifah called, 'From The Bottom Up'. An honors graduate of the esteemed Spelman College, Stacii Jae created and hosted Atlanta's number one girl talk radio show, "Black Girls Radio," before becoming an on-air jock at the country's number one urban radio station, CBS Radio, WVEE-FM V-103. A girl on the move from Memphis, to Atlanta, to Hollywood and back to Atlanta, Stacii Jae became a high-profile political figure, working in the Office of Atlanta Mayor Kasim Reed as the former Entertainment & Special Events Director, a top advisor, and a member of his executive leadership team for over three years. As a Hollywood actress, Stacii Jae landed roles in popular productions by You Go Boy! Productions (Martin), Savoy Pictures (How To Be A Player as Sherri) and New Line Cinema (A Thin Line Between Love & Hate as Peaches) as well as television roles NBC and FOX Networks. Stacii is also co-host, with R&B Diva Nicci Gilbert (Divas & Cocktails), a "no conversation is off-limits" late night talk show covering everything from lifestyle, fashion and celebrity headlines to celebrity dish. Truly in the midst of a chameleon career, Stacii Jae is colorful, bright and true. "My goal is to connect, educate, inspire and empower single women everywhere to power their lives forward with The Single Girls Club's 'living, laughing, learning, loving me' mantra. My belief is that a single woman living her life to the fullest as a whole individual will manifest all things whole in her life, love and career," Stacii Jae says.