A Veil of Spears (Song of Shattered Sands #3) (Paperback) 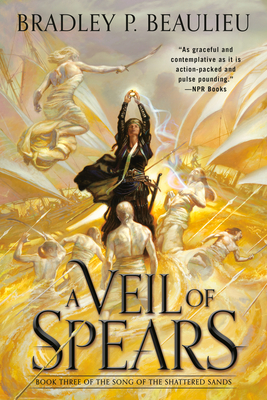 This is book number 3 in the Song of Shattered Sands series.

The third book in The Song of Shattered Sands series--an epic fantasy with a desert setting, filled with rich worldbuilding and pulse-pounding action.

Since the Night of Endless Swords, a bloody battle the Kings of Sharakhai narrowly won, the kings have been hounding the rebels known as the Moonless Host. Many have been forced to flee the city, including Çeda, who discovers that the King of Sloth is raising his army to challenge the other kings' rule.

When Çeda finds the remaining members of the Moonless Host, now known as the thirteenth tribe, she sees a tenuous existence. Çeda hatches a plan to return to Sharakhai and free the asirim, the kings' powerful, immortal slaves. The kings, however, have sent their greatest tactician, the King of Swords, to bring Çeda to justice for her crimes.

But the once-unified front of the kings is crumbling. The surviving kings vie quietly against one another, maneuvering for control over Sharakhai. Çeda hopes to use that to her advantage, but whom to trust? Any of them might betray her.

As Çeda works to lift the shackles from the asirim and save the thirteenth tribe, the kings of Sharakhai, the scheming queen of Qaimir, the ruthless blood mage, Hamzakiir, and King of Swords all prepare for a grand clash that may decide the fate of all.

Bradley P. Beaulieu fell in love with fantasy from the moment he began reading The Hobbit in third grade. While Bradley earned a degree in computer science and engineering and worked in the information technology field for years, he could never quite shake his desire to explore other worlds. He began writing his first fantasy novel in college. It was a book he later trunked, but it was a start, a thing that proved how much he enjoyed the creation of stories. It made him want to write more. He went on to write The Lays of Anuskaya series as well as The Song of the Shattered Sands series. He has published work in the Realms of Fantasy Magazine, Orson Scott Card’s Intergalactic Medicine Show, Writers of the Future 20, and several anthologies. He has won the L. Ron Hubbard Writers of the Future Award and earned a Gemmell Morningstar Award nomination. Learn more about Bradley by visiting his website, quillings.com, or on Twitter at @bbeaulieu.

Praise for The Song of Shattered Sands series:

“Çeda and Emre share a relationship seldom explored in fantasy, one that will be tried to the utmost as similar ideals provoke them to explore different paths. Wise readers will hop on this train now, as the journey promises to be breathtaking.” —Robin Hobb, bestselling author of Fool’s Assassin

"Fantasy and horror, catacombs and sarcophagi, resurrections and revelations: the book has them all, and Beaulieu wraps it up in a package that's as graceful and contemplative as it is action-packed and pulse-pounding." —NPR

"The Song of Shattered Sands series is both gripping and engrossing." —Kirkus Reviews

"Beaulieu's intricate world-building and complex characters are quickly becoming the hallmarks of his writing, and if this opening volume is any indication, [this series] will be one of the next great fantasy epics." —B&N SF&F Blog

"The city of Sharakhai and surrounding area is a living, breathing thing and I revel in it. Beautiful writing, a deep and exciting story and characters you care about." —Shelf Inflicted

"[Beaulieu's] writing is more an immersive experience than anything else; he draws the reader in with such great skill. The first novel was an electrifying start to the series, providing a spectacular introduction to a multi-layered and captivating character living in a world whose layers match her own." —SFF World

"[With Blood Upon the Sand] is an ambitious sequel, larger in scope than its predecessor – and it pulls it off magnificently. It’s intelligent, well drawn and a lot of fun to read – and so I’d recommend it wholeheartedly." —Sci-fi and Fantasy Reviews