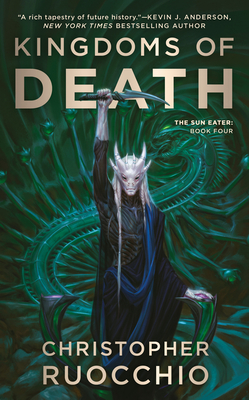 This is book number 4 in the Sun Eater series.

The fourth novel of the galaxy-spanning Sun Eater series merges the best of space opera and epic fantasy, as Hadrian Marlowe continues down a path that can only end in fire.

For nearly a century, he has been a guest of the Emperor, forced into the role of advisor, a prisoner of his own legend. But the war is changing. Mankind is losing.

The Cielcin are spilling into human space from the fringes, picking their targets with cunning precision. The Great Prince Syriani Dorayaica is uniting their clans, forging them into an army and threat the likes of which mankind has never seen.

And the Empire stands alone.

Now the Emperor has no choice but to give Hadrian Marlowe—once his favorite knight—one more impossible task: journey across the galaxy to the Lothrian Commonwealth and convince them to join the war. But not all is as it seems, and Hadrian’s journey will take him far beyond the Empire, beyond the Commonwealth, impossibly deep behind enemy lines.

Christopher Ruocchio is the internationally award-winning author of The Sun Eater, a space opera fantasy series, and the former Junior Editor at Baen Books, where he edited several anthologies. His work has also appeared in Marvel comics. He is a graduate of North Carolina State University, where he studied English Rhetoric and the Classics. Christopher has been writing since he was eight and sold his first novel, Empire of Silence, at twenty-two. His books have appeared in five languages. Christopher lives in Raleigh, North Carolina with his wife, Jenna.

Praise for the Sun Eater series

"Empire of Silence is epic science fiction at its most genuinely epic. Ruocchio has made something fascinating here, and I can't wait to see what he does next." —James S.A. Corey, New York Times-bestselling author of The Expanse novels

"Christopher Ruocchio's Empire of Silence is epic-scale space opera in the tradition of Iain M. Banks and Frank Herbert's Dune, without being a clone of either of them. His is a welcome new voice in science fiction." —Eric Flint, author of the bestselling 1632 series

"Empire of Silence has the sweep and political complexity of Dune (though no sandworms). It builds to a blazing climax, followed by a satisfying conclusion. I recommend the book." —David Drake, bestselling author of the RCN Series

"Empire of Silence is a rich tapestry of future history and worldbuilding, a galactic-sized story of a hero, a tyrant, but portrayed as a man." —Kevin J. Anderson, New York Times-bestselling author of The Dark Between the Stars

"Empire of Silence packs in action and erudition in equal measure. This is a gripping first installment in a space opera that delivers both high-adrenaline thrills and hard-earned wisdom about the human spirit." —D.J. Butler, author of Witchy Eye

"A richly imagined epic, briskly and vividly told." —R.M. Meluch, author of the Tour of the Merrimack series

"A craftsman of rare ability, Christopher Ruocchio lures you into a future filled with danger, action, irony, vaulting prose, and a few, precious dollops of hope." —David Brin, author of Earth and The Postman

"With the scope of Dune and a confessional, first-person voice that puts us into the mind of a possible madman, this is space opera at its most riveting and grandiose." —B&N Sci-Fi & Fantasy Review

"Space opera fans will savor the rich details of Ruocchio’s far-future debut, which sets the scene for a complicated series.... Readers who like a slow-building story with a strong character focus will find everything they’re looking for in this series opener." —Publishers Weekly

"Although stretched across a vast array of planets, the story line is often more focused on the intimate than on the expanse, giving it a wonderful emotional punch. This wow book is a must for fans of Pierce Brown and Patrick Rothfuss." —Library Journal (starred review)