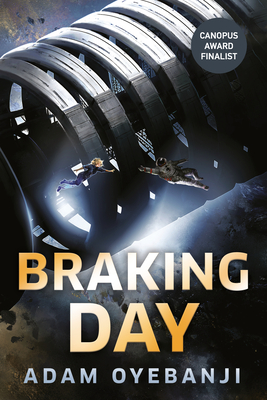 On a generation ship bound for a distant star, one engineer-in-training must discover the secrets at the heart of the voyage in this new sci-fi novel.

It's been over a century since three generation ships escaped an Earth dominated by artificial intelligence in pursuit of a life on a distant planet orbiting Tau Ceti. Now, it’s nearly Braking Day, when the ships will begin their long-awaited descent to their new home.

Born on the lower decks of the Archimedes, Ravi Macleod is an engineer-in-training, set to be the first of his family to become an officer in the stratified hierarchy aboard the ship. While on a routine inspection, Ravi sees the impossible: a young woman floating, helmetless, out in space. And he’s the only one who can see her.

As his visions of the girl grow more frequent, Ravi is faced with a choice: secure his family’s place among the elite members of Archimedes’ crew or risk it all by pursuing the mystery of the floating girl.  With the help of his cousin, Boz, and her illegally constructed AI, Ravi must investigate the source of these strange visions and uncovers the truth of the Archimedes’ departure from Earth before Braking Day arrives and changes everything about life as they know it.

Of Scottish and Nigerian descent, Adam Oyebanji is an escapee from Birmingham University and Harvard Law School. He currently lives in Pittsburgh, PA with a wife, child, and two embarrassingly large dogs. When he’s not out among the stars, Adam works in the field of counter-terrorist financing: helping banks choke off the money supply that builds weapons of mass destruction, narcotics empires, and human trafficking networks. Braking Day is his first novel.

Finalist for the Canopus Award for Published Long-Form Fiction

“Engaging, fast-moving, and inventive. The characters and the space environment feel totally real, as do the life and death challenges that never miss a step.” —Jack Campbell, New York Times bestselling author of The Lost Fleet novels

“Adam Oyebanji’s Braking Day blows the airlocks off the science fiction mainstay of generation ships with a vibrant world within bulkheads that’s as convincing as it is fresh. The characters are fabulous, the world-building impeccable yet never in-your-face, and the plot is breathtaking. All I can say is this is the best SF novel I’ve read in decades and it may be the best I’ve ever read. This author is now a must-read for me, and I’m sure he will be for you. Bravo!” —Julie E. Czerneda, Aurora Award-winning author of In the Company of Others

“Oyebanji crafts an amazing lived-in world aboard a sprawling generation ship, and a twisty mystery that’ll keep you guessing to the very end.” —Dan Moren, author of the Galactic Cold War series

“Braking Day is an outstanding debut novel that features exceptional world-building and a really well-realized generation ship society. Filled with twists and turns, it kept me guessing in the best way right up until the end.” —Michael Mammay, author of the Planetside series

“A crystalline, dazzling debut, teeming with life and data and full of breathless, rip-roaring twists and turns. From its first pages, Braking Day grabs you and never lets you go.” —Lena Nguyen, author of We Have Always Been Here

"Oyebanji builds intrigue upon intrigue through the novel’s first half and pays off the suspense with a series of jaw-dropping revelations. Innovative worldbuilding, a plot packed with surprises, and Oyebanji’s nuanced exploration of social and cultural shifts make this a must-read for space opera fans." —Publishers Weekly (starred review)

"This is a story of people who are their own worst enemies as groups fracture, danger ramps up, and options close in. It will appeal to fans of colony ship stories and coming-of-age tales." —Library Journal (starred review)

"Lovingly crafted characterization and world building, along with a satisfying twist, make Braking Day a worthy entry in the (space)shipboard thriller genre exemplified by classics such as Arthur C. Clarke’s 2001 and Mur Lafferty’s Six Wakes." —Booklist

"If you’re after action, mystery, and mind-bending mega-structures, look no further than Adam Oyebanji’s Braking Day... It zips along with some wonderful world-building and a lot of unexpected turns." —Washington Post