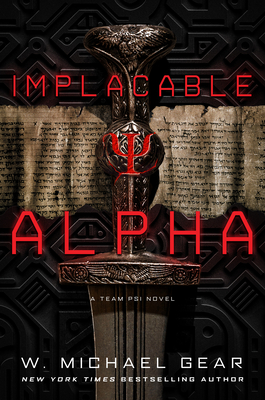 This is book number 2 in the Team Psi series.

Called the ‘Ennoia,’ the woman who came within a heartbeat of killing prisoner Alpha in the Grantham parking garage is back.

This time she’s snatched Dr. Timothy Ryan. The Psi Team find themselves caught in a battle that has been raging across timelines for 2000 years. But can they trust the Ennoia? Or is she using our timeline for her own purposes?

Meanwhile, Bill Stevens has his own agenda, and his goons have already crossed blades with Psi Team. Now they are coming for Alpha, and all the revenge they can get.

Because just as things seemed like they could get no worse, Alpha is back. And this time, she’s coming for blood.

W. Michael Gear is the author of more than fifty published novels, many of which are co-authored with his beloved wife, Kathleen O'Neal Gear. He is a New York Times, USA Today, and international bestselling author whose work has been translated into 29 languages and has over 17 million copies in print worldwide. Both an anthropologist and archaeologist, he brings extraordinary depth and complexity to his characters and settings.

“What a ride! Excitement, adventure, and intrigue, all told in W. Michael Gear's vivid, compulsively readable prose. A terrific new science-fiction series; Gear hits a home run right out of the park and all the way to Capella.” —Robert J. Sawyer, Hugo Award-winning author of Quantum Night

“A marginal colony on a living world—where human life and human will are tested to the limits. An intriguing and inventive new work from Michael Gear, first of a trilogy. Recommended!” —C. J. Cherryh, Hugo Award-winning author of Downbelow Station

“Gear kicks off a new sf series by weaving a number of compelling characters into the narrative, including bold heroine Talina Perez and Donovan itself, a planet teeming with danger and delights in turn.... Fans of epic space opera, like Rachel Bach’s Fortune’s Pawn (2013), will happily lose themselves in Donovan’s orbit.” —Booklist

“Dark and gritty, this book shows both the best and worst sides of humanity, all while being emotional and thought-provoking.” —It Starts at Midnight

“It's not easy to create an entire new planet setting and to immediately ground the reader in that world, but Gear makes it look easy.... He strikes an impressive balance between only telling us what we need to know when we need to know it and making this feel like a fully-realized place from the get-go.” —Den of Geek

“The novel's prose is as razor-sharp as Donovan's toothy beasts, its characters deftly defined. The enveloping narrative gallops along at a fierce pace and will make Outpost one of the must-read sci-fi releases of 2018 when it arrives on February 20 from DAW Books.” —SyFy Wire

“A thrilling tale of high-stakes survival on an alien planet.” —Dread Central