Murder at the Breakers (A Gilded Newport Mystery #1) (Paperback) 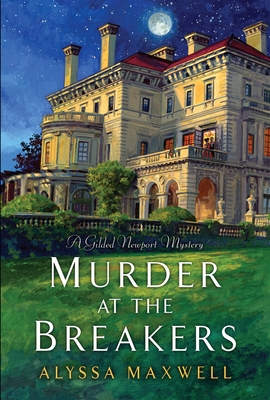 By Alyssa Maxwell
$17.86
Not Available

This is book number 1 in the A Gilded Newport Mystery series.

As the nineteenth century comes to a close, the illustrious Vanderbilt family dominates Newport, Rhode Island, high society. But when murder darkens a glittering affair at the Vanderbilt summer home, reporter Emma Cross learns that sometimes the actions of the cream of society can curdle one's blood. . .

Newport, Rhode Island, August 1895: She may be a less well-heeled relation, but as second cousin to millionaire patriarch Cornelius Vanderbilt, twenty-one-year-old Emma Cross is on the guest list for a grand ball at the Breakers, the Vanderbilts' summer home. She also has a job to do--report on the event for the society page of the Newport Observer.

But Emma observes much more than glitz and gaiety when she witnesses a murder. The victim is Cornelius Vanderbilt's financial secretary, who plunges off a balcony faster than falling stock prices. Emma's black sheep brother Brady is found in Cornelius's bedroom passed out next to a bottle of bourbon and stolen plans for a new railroad line. Brady has barely come to before the police have arrested him for the murder. But Emma is sure someone is trying to railroad her brother and resolves to find the real killer at any cost. . .

Alyssa Maxwell, author of the critically acclaimed Gilded Newport Mystery series, began a love affair with the city of Newport at a very early age. Always a lover of history, marrying into a large, generations-old Newport family opened up an exciting new world of historical discovery. From the graveyards whose earliest markers read from the seventeenth century, to original colonial houses still lived in today, to the Newport Artillery Company whose curator for many years was her husband's grandfather, Newport became a place of fascination and romantic charm. Today, Maxwell and her family live in Florida, but part of her heart remains firmly in that small New England city of great significance, a microcosm of American history spanning from before the Revolution through the Civil War, the Industrial Age, the Gilded Age, and beyond.