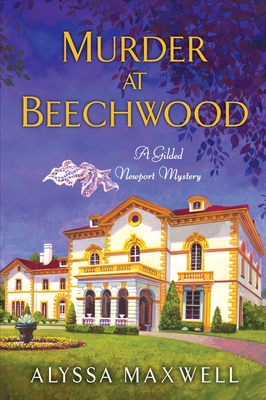 By Alyssa Maxwell
$15.95
Not Available

This is book number 3 in the A Gilded Newport Mystery series.

Having turned down the proposal of Derrick Andrews, Emma Cross has no imminent plans for matrimony—let alone motherhood. But when she discovers an infant left on her doorstep, she naturally takes the child into her care. Using her influence as a cousin to the Vanderbilts and a society page reporter for the Newport Observer, Emma launches a discreet search for the baby’s mother.

One of her first stops is a lawn party at Mrs. Caroline Astor’s Beechwood estate. But an idyllic summer’s day is soon clouded by tragedy. During a sailboat race, textile magnate Virgil Monroe falls overboard. There are prompt accusations of foul play—and even Derrick Andrews falls under suspicion. Deepening the intrigue, a telltale slip of lace may link the abandoned child to the drowned man. But as Emma navigates dark undercurrents of scandalous indiscretions and violent passions, she’ll need to watch her step to ensure that no one lowers the boom on her…

Alyssa Maxwell began a love affair with the city of Newport when visiting friends there back in her high school days. Time and again the cobbled lanes and harbor‑side, gas‑lit neighborhoods drew her to return, and on one of those later visits she met the man who would become her husband. Always a lover of history, Alyssa found that marrying into a large, generations‑old Newport family opened up an exciting new world of historical discovery. From the graveyards whose earliest markers read from the seventeenth century, to original colonial houses still lived in today, to the Newport Artillery Company whose curator for many years was her husband’s grandfather, Newport became a place of fascination and romantic charm. Today, Maxwell and her husband reside in Florida with their two adult daughters, but part of her heart remains firmly in that small New England city of great significance, a microcosm of American history spanning from before the Revolution through the Civil War, the Industrial Age, the Gilded Age, and beyond. For more info please visit www.alyssamaxwell.com.

Praise for Murder at the Breakers

"This is a promising start to an engaging mystery series filled with smart observations."
—Library Journal

"Brew some Earl Grey and settle down with a scone for this one."
—Washington Independent Review of Books