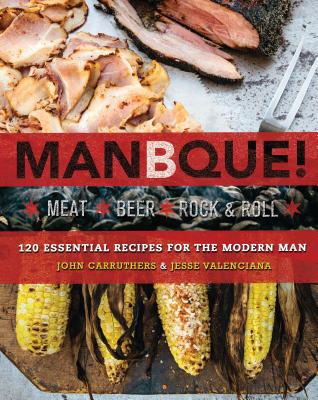 ManBQue is the next griller's Bible for those in their 20s and 30s. Dedicated to meat, beer, and rock n' roll, it starts with the basics: how to grind, assemble, and grill a perfect burger and how to season, sear, and rest a perfect strip steak. Then it moves on to other staples -- perfectly cooked wings, slow-roasted BBQ, and handmade sausages. There are also suggestions for monster sandwiches and mouthwatering tacos. Once you've got that under control, it takes on all the weird stuff: the pig tongue and beef hearts, snails and, yes, even salad.

Along the way there are beer pairings, explaining the different styles and the basic principles of putting a bottle with whatever comes off the grill. Not content with simple descriptions, ManBQue worked with craft brew experts to tell you why that IPA goes so well with your lamb burger and which bock you should be dousing your brisket in.

But ManBQue is more than a cookbook, it's a community; it's a grilling and lifestyle organization that grew into a global society with thousands of followers. Once a month the members cast aside their daily responsibilities for good food and company. In this spirit, the margins are filled with stories of what you're eating, which ManBQue member invented it, and how that insanely delicious process occurred. By the end, you too will be shouting "MANBQUE!"

John Carruthers is a writer, editor, and 2014 graduate of Hot Dog University. Yes, that's a real thing. His thoughts on meat, and the cooking and eating thereof, have appeared in Serious Eats, Thrillist, The Big Lead, and Food City from the University of Illinois Press. He and his wife live in Chicago, because you can get a decent taco there at any hour.

Jesse Valenciana is the founder of ManBQue and lifelong Chicagoan. Aside from contributing his sports related sarcasm to a local newspaper, he gets paid to travel the country for a beer company and has his pig-dog Gus tattooed on his arm. That's called living the dream.