Wizardology: The Book of the Secrets of Merlin (Ologies) (Hardcover) 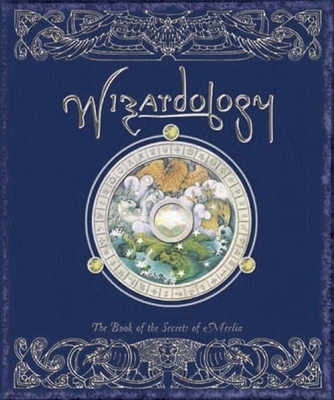 Aspiring wizards can tune in to the age-old wisdom of Merlin with this dazzling compendium of all things magical, unveiling novelty elements throughout.

For any apprentice determined to learn the arcane arts of wizardry, could there be a better teacher than . . . Merlin himself? Originally discovered in 1588, this remarkable text by history's most respected wizard is revealed to the world for the very first time. Lavishly illustrated by four delicate artists, Wizardology's intricate design even conceals a series of hidden symbols that spell out a secret message when their code is deciphered — if the reader is clever enough to find them.

Among Wizardology's special features are:

— a glittering crystal ball-like jewel on the front cover
— a world map showing locations of wizards around the globe
— tactile samples of a "fairy flag" with one wish remaining and a phoenix feather to aid in flying charms
— booklets explaining the proper use of spells, familiars, and potions
— a removable dragon pendant allowing the user to dowse for mythical beasts
— a pack of eight removable fortune-tellling cards
— a 48-page mini book of divination on the final spread

Until recently, Dugald A. Steer worked as an author and editor at Templar Publishing. He is the writer behind Candlewick's widely acclaimed New York Times bestsellers, Dragonology, The Dragonology Handbook, and Egyptology, as well as the forthcoming Egyptology Handbook. Dugald has now given up his editorial job to concentrate on writing full-time, especially more books with "ology" in the title. Dugald Steer lives near London and has far less free time than he imagined he would.

Nghiem Ta, Ology Alchemist: Nghiem Ta works as a designer and paper-engineer at Templar Publishing. She has overseen the creation of all of the "Ologies" in collaboration with Dugald Steer. She is responsible for developing the lavish special effects and paper-engineering that truly set these books apart and she sees every title as a fresh challenge to pack in increasing amounts of clever new novelties! Her skills, and those of the rest of the creative team, were recognized this year when Egyptology was awarded the 2005 British Book Award for Design and Production.

Anne Yvonne Gilbert is an artist of international acclaim and her work has been exhibited in galleries all over the world. Born in Northumberland, she studied at Newcastle College and Liverpool College of Art, and graduated with a diploma in art and design. She has illustrated numerous books, including most recently Hans Christian Anderson's The Wild Swans. She received the Golden Stamp Award in 1985 and also illustrated a series of stunning postage stamps for Royal Mail.

John Howe was born in 1957 in Vancouver, Canada. He grew up in British Columbia and studied at the Ecoles des Artes Decoratifs de Strasbourg. A renowned fantasy artist, John Howe made a significant contribution to the creation of the look of Middle-earth for Peter Jackson's film trilogy of The Lord of the Rings. John has also illustrated numerous Tolkien titles, novels and children's books. Wizardology is his first project with Candlewick Press. John Howe now lives in Switzerland with his wife, Fataneh, who is also an illustrator, and their son Dana.


Tomislav Tomic was born in Zagreb, Croatia, in 1977. After graduating from Zagreb's Academy of Fine Arts in 2001, he started working as an illustrator. Since then, he has produced cover illustrations for numerous books and has also illustrated pieces for magazines. His black and white engravings for Wizardology are his first for an American publisher, but no doubt more will follow!

Helen Ward trained as an illustrator at Brighton School of Art, under the direction of well-known children's illustrators such as Raymond Briggs, Justin Todd, Chris McEwan and John Vernon Lord. In 1985, her final year at Brighton, Helen was awarded the first Walker Prize for Children's Illustration. Wizardology is the third "Ology" title to which Helen has contributed her art. Her illustrations include the fabulous Wizard Master's Workshop in Chapter III and the black and white woodcuts seen throughout the book.