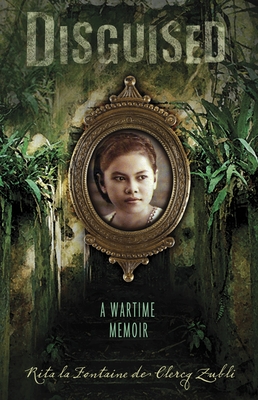 Told in her own words, here is the true story of a girl who posed as a boy during World War II — and dared to speak up for her fellow prisoners of war.

With the Japanese army poised to invade their Indonesian island in 1942, Rita la Fontaine’s family knew that they and the other Dutch and Dutch-Indonesian residents would soon become prisoners of war. Fearing that twelve-year-old Rita would be forced to act as a "comfort woman" for the Japanese soldiers, the family launched a desperate plan to turn Rita into "Rick," cutting her hair short and dressing her in boy’s clothes. Rita’s aptitude for languages earned her a position as translator for the commandant of the prisoner camp, and for the next three years she played a dangerous game of disguise while advocating against poor conditions, injustice, and torture. Sixty-five years later, Rita describes a war experience like no other — a remarkable tale of integrity, fortitude, and honor.
Back matter includes a glossary.

Rita la Fontaine de Clercq Zubli grew up in Indonesia, where she and her family endured three and a half years in Japanese POW camps. After the war, Rita resumed her life as a young woman and married a Dutch rubber planter. They have four grown children and live in Nashua, New Hampshire.

The Japanese established headquarters all over town. Our home was no longer ours. It was theirs. The local school would become our home away from home, but before going there we had to register at the police station.

At the station we joined other Dutch companions in distress. My father looked around and expressed surprise at the number of former Dutch government officials who were in the same situation.

I quickly observed that our family was the only one with children. A few single men were in the group, along with some older couples and one single woman — my teacher, Miss Seau.

When my mother saw Miss Seau, she immediately walked up to her and pulled her aside in private conversation. Miss Seau knew that I was a girl! She was the one who encouraged me to play the accordion on Saturdays at singing class. She led the students in song while I accompanied
them on my accordion.

Just as the two women began to speak in low tones, heads bowed, my father approached to inform my mother that he was being called in for the "registration." I watched the two women from a short distance away. An expression of surprise came on Miss Seau’s face; then she walked away
from my mother and in my direction.

She returned my greeting with a smile and a rather reserved, "Hello! You’re looking good! The change is very becoming."

Something in the way she looked at me made me uneasy, so I asked her, "Is anything wrong?" She moved closer to me and whispered, "Your mother told me everything except . . ." She paused for a moment, looking around to assure privacy.

"Except what, Miss Seau?"

Her question caught me totally off guard. We had forgotten to give me a new name! Rita wouldn’t do anymore. I needed a boy’s name. In our excitement, none of us had thought of it!

"Shhh! Excuse me, Miss Seau!" I said in panic. "Please don’t talk to anybody about me until I return." I fearfully looked around, afraid that someone might have overheard her call me by my real name.

When I whispered our oversight to my mother, she turned pale.

"Dear Lord, how could we have overlooked something so important?" She became frantic, realizing that my father was not there to discuss the matter. Tante Suus, noticing the commotion, came closer to see what was wrong. The two whispered and now it was my aunt’s turn to be shocked. At the same time, my father emerged from the office. When
he approached them, Tante Suus sighed with relief and left my parents to talk.

From a distance, it was as if I was viewing a silent movie with the actors involved in a squabble. Then my father gently took my mother’s arm and led her toward us. He seemed very much in control, relaxed, and confident, unlike my mother. As they reached us, my father said to me
with a big grin on his face, "Hi, Rick!"

"Is that my new name, Pop?" I whispered.

"Yes! From now on your name is Richard. You may be called Rick." When I heard that, it was as if the little girl named Rita with beautiful long brown hair no longer existed. I felt that this new creation by the name of Rick, with the boy’s haircut and dressed in boys’ clothing, had completely taken over her life.

My father then gathered us around him for a talk. He told my brothers that they had to forget they had a sister. "You now have a brother, and his name is Rick." René, who was much too young to really understand what was going on, took it all in stride. Ronald, on the other hand, seemed
annoyed.

"I was very lucky that the clerk did not do any crosschecking, especially on Rita’s birth certificate," my father continued, addressing my mother and aunt. "I would not have known how to get out from under it if he had. It would have been disastrous, but . . . all is well. Thank goodness!"

I returned to Miss Seau to give her the news about my name. When I rejoined my family, Father Koevoets was there. He gave me two thumbs up and a wink as if to say, "Keep up the good work!"

Registration for all prisoners was completed that afternoon. We were ordered to gather up our belongings, line up, and march to the school across the street. Walking through the gate with the group reminded me of cattle being driven into a corral, just like in a western movie. On one side of the school yard, we rested on the grass in the cool shade of the trees. Japanese guards flanked the area, keeping a sharp eye on us.

Moments later, food was distributed. We had no idea where it came from or who had prepared it. During the meal, we tossed about many questions regarding our situation, but none of us knew the answers. One of the most crucial questions — "Will we stay together or be segregated? — " was left unanswered. Dread overcame us all.

I remembered what my father had said earlier, about how the enemy would have better control over its prisoners if they were all concentrated in one place. It was true, and it was happening now. There was no doubt in my mind that he had been right.

After lunch, the sharp sounds of slamming car doors cut through the already tense atmosphere. Voices at the front gate spoke what sounded like an order in Japanese, directed at us. Although none of us understood what was said, each of us instinctively jumped.