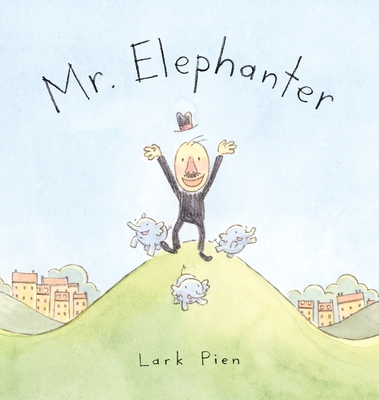 “I found Mr. Elephanter a delight, and full of surprises. From the get-go the reader sees elephants portrayed as tiny characters, much like preschoolers. And their caretaker? He is a capable, kind old man. So many children say goodbye to their parents every morning and are cared for by a variety of people. This book has appeal.”
— Valerie Lewis, Hicklebee's, San Jose, CA

Come visit the Elephantery, where Mr. Elephanter looks after the peppy elephanties! A charming, quirky picture book debut by an acclaimed cartoonist.

Early every morning, Mr. Elephanter arrives at the Elephantery to care for his diminutive charges, who greet him with toots and trumpets. There are hugs and hellos all around! They all eat pancakes, paddle and splash in the neighborhood pool, and parade through the bustling city. After naps, Mr. Elephanter pretends he’s a tunnel, tower, and bridge, while the elephanties play all around him. In fresh watercolors exuding warmth and whimsy, Lark Pien introduces the doting Mr. Elephanter — and the most adorable miniature creatures you’ll ever meet.

Lark Pien is the colorist for the National Book Award Finalist and Printz Award Winner American Born Chinese by Gene Yang and the author and illustrator of the comic Long Tail Kitty. Mr. Elephanter is based on a character that first appeared in one of her hand-printed mini-comics. She lives in Oakland, California.

There isn’t a page here that doesn’t melt with charm, from Mr. Elephanter, with his balloon head and small detonation of a mustache, to the tumbling, bumbling elephanties. With a slightly old-fangled atmosphere, expressive line work and balmy watercolors, Pien has created a sense of well being, where all is (mostly) right in the best of worlds.
—Kirkus Reviews (starred review)

The text has the delicate effervescence of nonsense, which is, as usual when at its best, rooted in solid and realistic structure.… The illustrations employ gentle-toned watercolors and softly detailed pencil lines, with an enchanting toylike miniaturization in the bijou scenes.… It’s original, it’s funny, and it’s filled with entrancing tiny elephants-what more could an audience want?
—Bulletin of the Center of Children's Books (starred review)

This vision of quiet love and steady, dependable attention is just the thing for children to fall asleep to.
—Publishers Weekly (starred review)