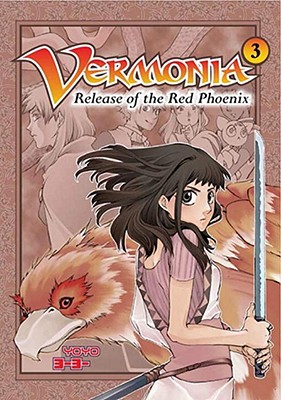 This is book number 3 in the Vermonia series.

This is the third thrilling episode in this magical Manga series. General Uro's reign of terror continues to spread through the whole of Turtle Realm. The three skateboarders from the distant planet of Blue Star, Doug, Naomi, and Jim are brought to a village burning to a cinder under the command of evil Uro. Naomi must become one with her warrior spirit, the red phoenix, in order to help put out the destructive flames. As they grow stronger, each now possessing the power of their guardian animal alter-ego, the friends draw ever closer to finding and freeing Mel who is trapped in a bubble supervised by one of General Uro's brainwashed soldiers, Captain Acidulous, and also to restoring the peaceful reign of Queen Frasinella to the planet of Vermonia. This cutting-edge and authentically-Japanese Manga series unfolds over ten enthralling and stunningly rendered episodes. Fans will be able to delve deeper into the world, learn more about the characters, continue the adventure and play games on-line by following hidden clues in this book.

YOYO is a cutting-edge Japanese manga studio and the creator of the VERMONIA series.