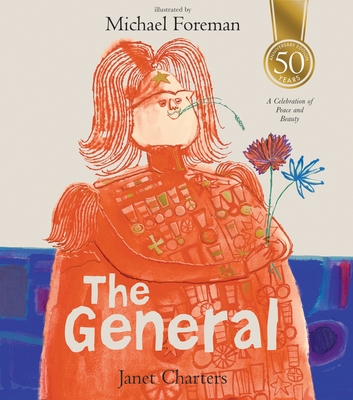 Can a general who was once ruthless learn to spread peace and love? A stunning edition of Michael Foreman’s debut picture book.

There once was a general who fell off his horse, only to discover the beauty of flowers and nature. From that day on, he vowed to change the world around him by embracing peace. Created in 1961 — and retaining the essence of that decade — this picture book illustrated by three-time Kate Greenaway Medal winner Michael Foreman is lovingly restored in a beautiful edition sure to appeal to longtime fans and new readers alike.

Michael Foreman created The General to impress potential freelance employers while he was still at art college. It became his first published book. One of the foremost illustrators of his generation, Michael Foreman lives in London.

"When we worked on THE GENERAL we wanted to produce a fun and lively story for children, but one to encourage a sympathetic outlook on the world." — Janet Charters — Quote

"My first book, THE GENERAL was about a general who made his country the most beautiful in the world instead of the most powerful. Fifty years on, it seems even more relevant as the threat to the environment, hinted at in THE GENERAL, (not to mention the threat of war) is now plain to see — even by politicians." — Michael Foreman — Quote