Can We Save the Tiger? (Paperback) 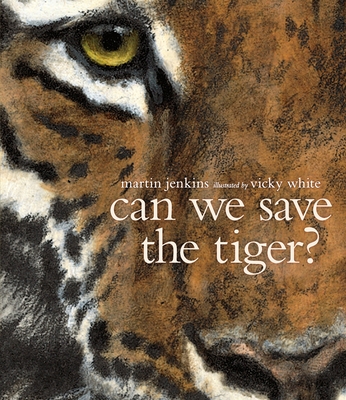 “A stunningly beautiful book as well as an eloquent appeal and a consciousness raiser.” — The Horn Book

Tigers, ground iguanas, partula snails, and even white-rumped vultures are in danger of disappearing altogether. Using the experiences of a few endangered species as examples, Martin Jenkins highlights the ways human behavior can either threaten or conserve the amazing animals that share our planet. Vicky White’s stunning portraits of rare creatures offer a glimpse of nature’s grace and beauty — and give us a powerful reason to preserve it.

Martin Jenkins, a conservation biologist, has written several nonfiction books for children, including Ape, Grandma Elephant’s in Charge, The Emperor’s Egg, and Chameleons Are Cool. He lives in Cambridge, England.

Vicky White worked as a zookeeper for several years before earning an M.A. in natural history illustration from London’s Royal College of Art. She made her picture book debut with Ape. She lives in Middlesex, England.

Magnificent artwork and a careful balance of good and bad news are the strengths of this examination of endangered species.
—Publishers Weekly (starred review)

From big, beautiful tigers to the lowly partula snail, the stunning illustrations in this album of endangered species accompany a familiar message: Human actions change the world in ways that affect many other species.
—Kirkus Review (starred review)

The artist draws readers in through the eyes of the animals, making it nearly impossible to deny them the attention and respect that their plight deserves....The collection of success stories works as inspiration and provides a clear indication that yes, we can save the tiger, but it requires action, hard work, conscious decisions, and books like this one in the hands of children
—School Library Journal (starred review)

A stunningly beautiful book as well as an eloquent appeal and consciousness raiser.
—The Horn Book (starred review)