Race to the Bottom of the Sea (Hardcover) 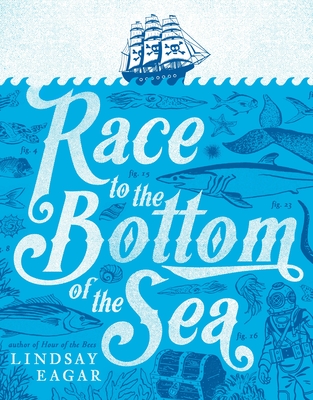 By Lindsay Eagar
$20.15
Not Available

Can a clever young inventor uncover a ruthless pirate’s heart of gold? Thrilling sea adventure takes on a hint of steampunk in the second book by the author of the acclaimed Hour of the Bees.

When her parents, the great marine scientists Dr. and Dr. Quail, are killed in a tragic accident, eleven-year-old Fidelia Quail is racked by grief — and guilt. It was a submarine of Fidelia’s invention that her parents were in when they died, and it was she who pressed them to stay out longer when the raging Undertow was looming. But Fidelia is forced out of her mourning when she’s kidnapped by Merrick the Monstrous, a pirate whose list of treasons stretches longer than a ribbon eel. Her task? Use her marine know-how to retrieve his treasure, lost on the ocean floor. But as Fidelia and the pirates close in on the prize, with the navy hot on their heels, she realizes that Merrick doesn’t expect to live long enough to enjoy his loot. Could something other than black-hearted greed be driving him? Will Fidelia be able to master the perils of the ocean without her parents — and piece together the mystery of Merrick the Monstrous before it’s too late?

Lindsay Eagar is the author of the novel Hour of the Bees. She lives in the mountains of Utah with her husband and daughters.

Eagar’s novel never lags or loses heart, and it’s irresistibly baited with a cursed treasure hoard, danger, and candy. Flashback chapters fill in important backstory on Merrick, and readers will adore Fidelia for the passionate and clever heroine she is. Refreshingly, women are as likely to captain a ship as plunder it in this fictional world, a small but enriching detail. Earnest and exciting, this swashbuckling voyage of self-discovery sparkles even when threatened by the stormiest seas.
—Booklist (starred review)

The tidal pull of Eager’s swashbuckling pirate adventure has its source in 11-year-old Fidelia Quail...Set in a world that combines futuristic and historical elements to intriguing effect (Fidelia wears a pinafore, but knows her way around “Hydro-Scanners” and other tech), this is an exciting maritime adventure with a strong, layered heroine.
—Publishers Weekly (starred review)

The tale makes an effective read-aloud...More than just another lively pirate adventure, this novel celebrates science, invention, and the pursuit of knowledge while sensitively exploring loss.
—School Library Journal

This suspenseful novel is a great middle school read and yields a happy ending as Fidelia pursues her dream of becoming a famous scientist like her parents.
—School Library Connection

Fidelia’s emotional compass is sensitively and accessibly handled in the midst of her harrowing adventures on a dodgy craft...Fidelia’s problem-solving skills as well as her courage and ambition mark her out as a worthy hero for budding scientists and armchair adventurers.
—Bulletin of the Center for Children's Books

"Race to the Bottom of the Sea" has something for every reader: science, beautiful imagery, treasure, danger, self-discovery, robotics, all things pirates and so much candy.
—Deseret News