The Most Important Thing: Stories about Sons, Fathers, and Grandfathers (Hardcover) 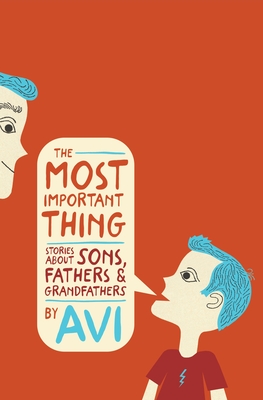 One of the most beloved writers of our time presents seven short stories exploring the vital ties between fathers and sons.

Luke sees the ghost of his father but can’t figure out what Dad wants him to do. Paul takes a camping trip with the grandfather he’s just met and discovers what lies behind the man’s erratic behavior. Ryan has some surprising questions when he interviews his prospective stepfather for the job. In a compellingly honest collection of stories, multiple-award-winning author Avi introduces seven boys — boys with fathers at home and boys whose fathers have left, boys who spend most of their time with their grandfathers and boys who would rather spend time with anyone but the men in their lives. By turns heartbreaking, hopeful, and funny, the stories show us boys seeking acceptance, guidance, or just someone to look up to. Each one shines a different light on the question “What is the most important thing a father can do for his son?”

Avi is one of the most celebrated authors writing for children today, having received the Boston Globe–Horn Book Award, the Scott O’Dell Award, the Christopher Award, the Newbery Medal, and two Newbery Honors. He lives in Colorado.

In this collection of seven heartfelt stories, the indefatigable Avi breathes new life into an old theme: the relationship between sons and fathers (and the occasional grandfather). Ranging in tone from the somber (“Departed”) to the sprightly (“Tighty-Whities or Boxers?”), the stories have in common a psychological acuity, the presence of inevitable change, and the grace of Avi's simile-rich style.
—Booklist (starred review)

Avi's septuplet of stories suggests that the best thing you can do for your son might just be to hope you've somehow given him the tools to evolve into an adult who will love and understand you on the other side. Though this is tuned to the XY frequency, don't discount it as a book for daughters who value such beautiful prose as "Now, snow drifting down, slowly, steadily, each flake the ghost of a leaf." What Oedipus didn't know about the intricacies of father/son kinship could fill a book—and has.
—Kirkus Reviews (starred review)

Avi’s deft incorporation of humor, heartache, and the occasional touch of the supernatural will draw readers in as they ponder how family ties bind in both positive and negative ways.
—Publishers Weekly (starred review)

Seven short stories, some written in first person, some in third, offer glimpses into the lives of seven middle-school boys as they navigate complicated relationships with fathers and grandfathers...“What is the most important thing a father can do for his son?” The stories don’t directly answer the question, but they do show the consequences of a father’s absence, either physically or emotionally, and the varied ways boys find to compensate for the loss. “Be there,” the stories seem to say to fathers and grandfathers.
—The Horn Book

Together, these offerings weave a picture of the relationships that can develop between teenage boys and their fathers and grandfathers—or the lack thereof...readers who take a chance on this collection will be rewarded.
—School Library Journal

Avi offers a multifaceted view of the way boys and men relate to each other, painting neither a perfectly rosy nor dreadfully bleak picture, and he gives space for each character’s personality, making it clear that the relationships are weighted both with history and the boys’ and men’s temperaments. Few of the stories offer complete resolution, instead of- fering a snapshot of an ongoing and shifting connection.
—Bulletin of the Center for Children's Books

Avi is a master of just about anything he writes, and this collection is superbly crafted and ideal for discussions.
—BookPage

In true Avi form, in what his fans have come to expect, the stories are page turners. Each story keeps the reader glued to the book, curious to find out how the clever kids are going to come to terms with their experiences and carry on with their lives with a better understanding of who they are and what their family is all about.
—New York Journal of Books

Through these and other powerful stories, readers will emerge with a heightened awareness of what boys really need and identify with the struggles and voices of these seven distinct characters. Equally important for fathers as it is for sons, this is a must-read.
—Books to Borrow...Books to Buy (Kendal A. Rautzhan column)

School librarians would do well to include this in their lists for reluctant readers because of its large font, short stories, and because of the possibility of further discussion and interest.
—School Library Connection