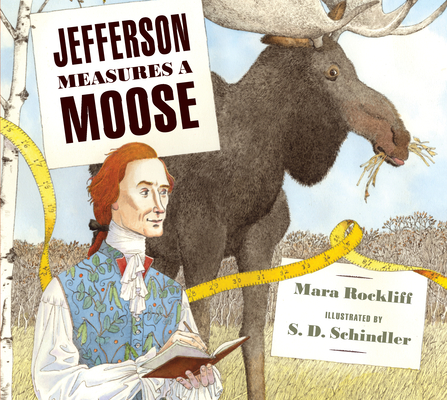 The author of Mesmerized shares another comical true tale of a Founding Father using science to defeat ignorance and stop the spread of false information.

Thomas Jefferson was wild about numbers. He was constantly counting, measuring, and observing things that caught his interest. He loved sharing his discoveries and reading the discoveries of others. But when a famous Frenchman published a book about America, Jefferson was appalled: all the information in the book was wrong. The author insisted that America was a wretched, dismal place, where birds could not sing, dogs could not bark, and everything and everyone was puny and weak. Thomas Jefferson resolved to set the record straight — with numbers — and prove to the world that the new nation was worthy of investment. But how do you show that a country is plentiful in an age when photography hasn’t been invented yet? Mara Rockliff, master of children’s nonfiction, details another little-known moment in math and natural history, illustrated with humor by prolific artist S. D. Schindler and accompanied by extensive back matter and an informative author’s note.

Mara Rockliff is the author of many books for children, including the picture books Mesmerized, an Orbis Pictus Honor Book; Doctor Esperanto and the Language of Hope; Around America to Win the Vote; Anything But Ordinary Addie; Chik Chak Shabbat; and Me and Momma and Big John, a Charlotte Zolotow Honor Book and Golden Kite Award winner. She lives in Lancaster, Pennsylvania, with her family.

S. D. Schindler has illustrated dozens of books for children, including the Catwings series by Ursula K. Le Guin, Hornbooks and Inkwells by Verla Kay, Big Pumpkin by Erica Silverman, Every Living Thing by Cynthia Rylant, and Brother Hugo and the Bear by Katy Beebe. He lives in Philadelphia, Pennsylvania.

In Rockliff’s rollicking tale, Jefferson jots down numbers everywhere he goes...Children obsessed with the early republic and with science may find this obscure tale entertaining.
—Kirkus Reviews

Rockliff’s well-paced, wryly funny narration is enjoyable as well as informative (if Buffon “believed in chirpless chickadees and puny pigs, then so would everybody else”). Schindler’s familiar gravely humorous delicacy, in line and watercolor that sometimes echoes wood engraving with its hatching, is perfectly suited to the personable recounting of a polite historical feud. This would be a boon to early math classes or discussions about the importance of data, but it also serves as offbeat entertainment.
—Bulletin of the Center for Children's Books

Rockliff depicts a lesser-known side of Jefferson—the mathematician. The text reads well, and older children could handle the language on their own, even if some of the more tongue-in-cheek comments go over their heads. Schindler’s illustrations evoke a distinct sense of place and time...An acceptable addition for collections looking to make their Founding Fathers sections a little more interesting.
—School Library Journal

Rockliff’s light touch adds humor to the tale, while Schindler’s soft watercolors both mirror the text’s tone and give a sense of the times. Back matter answers Jefferson’s mathematical questions and includes a list of both primary and secondary sources.
—The Horn Book