A Stranger in Town (A Will Tanner Western #2) (Mass Market) 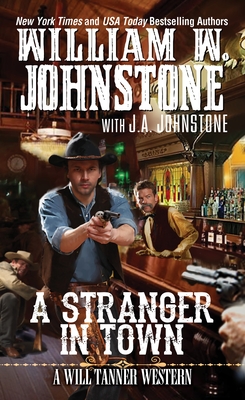 This is book number 2 in the A Will Tanner Western series.

THE GREATEST WESTERN WRITERS OF THE 21ST CENTURY

America’s greatest western storytellers begin the explosive new legend of Will Tanner, a U.S. deputy marshal who will risk everything to save a friend, and bring two desperados to justice . . .

The train grinds to a halt somewhere in the Indian Nations, and the bandits get onboard. They take everything on the train worth stealing and gun down a guard to make their escape—just another notch on the belt for Ben Trout and Zack Larsen, two of the most savage killers in the west. U.S. Deputy Marshal Ed Pine follows them to Muskogee. There the trail runs cold, and Ed Pine diappears. To save his friend, Deputy Will Tanner rides for Muskogee, where justice extends only as far as the range of a Colt .45.

Tanner earned his badge in a blistering gunfight, when he got the drop on a trio of killers and saved the life of another fellow marshal. Now, he’ll have to be just as quick—and just as deadly. To bring in Trout and Larsen, Tanner must set his badge aside, and resort to the law of the gun.

Being the all-around assistant, typist, researcher, and fact checker to one of the most popular western authors of all time, J.A. Johnstone learned from the master, Uncle William W. Johnstone.

“Every day with Bill was an adventure story in itself. Bill taught me all he could about the art of storytelling. ‘Keep the historical facts accurate,’ he would say. ‘Remember the readers, and as your grandfather once told me, I am telling you now: be the best J.A. Johnstone you can be.’”